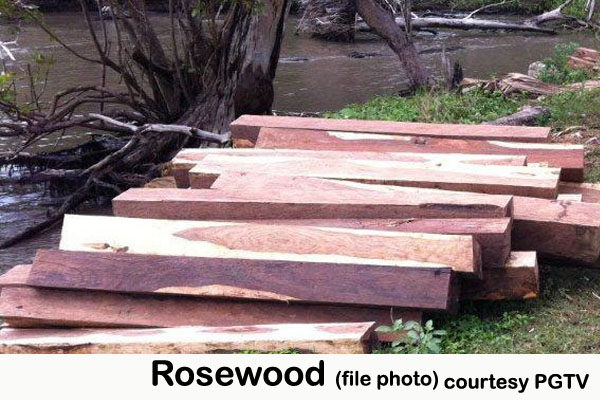 BELIZE CITY, Thurs. Dec. 8, 2016–Rosewood is still being plundered in Belize, despite a recent action to impose higher trade restrictions under the Convention on the Trade in Endangered Species (CITES). Today, the Forest Department reported that it had made a major bust in Benque Viejo del Carmen Town, where it crow-footed 30,000 board feet of unmarked rosewood, apparently destined for export.

Dr. Colin Young, Chief Executive Officer in the Ministry of Fisheries, Forestry, the Environment and Sustainable Development, told us that information provided to him indicates that currently, rosewood flitches fetch between US$10 and US$14 a board-foot, with the higher price being paid for value-added products.

The bust was made yesterday, Wednesday, December 7, when officers of the Forest Department conducted a site inspection at a woodworks factory in Benque, according to an official release.

It said that officers found over 30,000 board feet of illegally harvested rosewood in flitch form.

“The wood was found to be without official marking and documentation and consequently crow-footed by the Forest Department officers,” the release added.

CEO Young told us that the owner, who has not been named pending arraignment tomorrow or early next week, has been cooperating and site checks made by Forest Department officials today found the rosewood, which has yet to be transported “to a secure location,” still intact.

Forestry authorities intend to investigate when the wood was harvested. Whether it was harvested after the change in CITES classification will determine what options the Government has for disposing of the rosewood.

Young said that proposals will be made to Cabinet, and whatever is done with the rosewood will be transparently done and the public will be updated, he told us.

Export of rosewood, under new CITES restrictions, can only take place if the rosewood is harvested legally and sustainably.

The Ministry of Forestry advises that, “If these conditions are unmet, rosewood cannot be traded internationally.”

Under the Forest Act Chapter 213 of the Laws of Belize, no tree shall be felled for timber without the prior written permission of the Forestry Department, it added.

“Anyone found cutting a tree without permission or in possession of lumber so gotten is committing an offence and liable to prosecution under the law,” the release said.

It asks the general public to report any suspicious activity to the Forest Department at 822-1524.