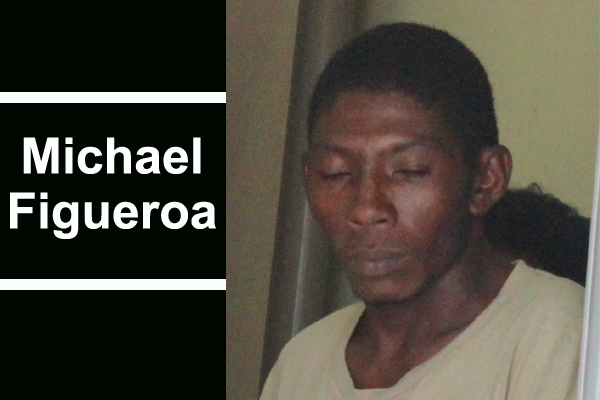 Michael Figueroa charged with aggravated assault with a firearm, and Figueroa’s common-law wife, Stephanie Welch, was charged with threatening words directed against her own sister on Tuesday

The days are super hot right now, and so are tempers in Hattieville: two blood sisters have differences of opinion and their children and husbands are being sucked into the dispute.

Two days ago, Stephanie Welch, 32, was charged in the Belize City Magistrate’s Court with assaulting Kimberly Ramclam, 37, the principal of the Hattieville Adventist Primary School, and threatening to burn down the home of her (Stephanie’s) sister, Elorine Fuller, and have men shoot it up.

Just moments after Welch was arraigned before Magistrate Dale Cayetano, her nephew, Glen Requeña, 22, Elorine’s son, was charged with aggravated assault with a firearm after Welch told police that Requeña pointed a gun at her after telling her that “…one ah unu wanh dead now.”

This morning, Michael Figueroa, 29, a security guard who is Stephanie Welch’s common-law husband, was charged with two counts of aggravated assault with a firearm. He pleaded not guilty to the charges.

According to the police, at 7:30 last night Shaneen Fuller, 23, and her sister Meloney Logan (Welch’s nieces), were at their home when Figueroa, who is known to them, approached them with a shotgun in his hand. Figueroa allegedly pointed the shotgun at them and told them he would shoot them.

Figueroa was also charged with another count of aggravated assault upon a female minor, 12, Welch’s grandniece, with a piece of 2×4 lumber. No information was provided for this report.

Hattieville police arrested and charged Figueroa, but when he appeared in court, unrepresented, he wasn’t offered bail because two of the incidents allegedly occurred with a firearm. He was remanded to the Hattieville Prison, where he will remain until his next court appearance, scheduled for June 24, 2013.