PUNTA GORDA, Toledo District, Thurs. Mar. 31, 2016–The Belize National Teachers’ Union (BNTU) today concluded its 46th Annual Convention held for two days in Punta Gorda—the highlight of which was a trek to the border village of Jalacte in south-western Belize, where educators got a feel for what happens at the unregulated border crossing.

That was only the first step, according to BNTU Rural Toledo president, Stephen Sho. He told Amandala that earlier today, they passed a resolution for bigger rallies to come as a part of a national campaign to shine the spotlight on the Belize-Guatemala issue.

Over 100 teachers traveling in 2 buses, vans and private cars, made the journey on Wednesday to kick off their annual gathering as a part of their “Stand Up for Belize” rally. At the border, the teachers sang the national anthem, said the national prayer of Belize and raised their Belize flags.

Sho said that it was the Council of Management of the BNTU which had collectively decided on the initiative. The BNTU has indicated that this is not a political issue, but a national one which they want to be given adequate attention by the Government. 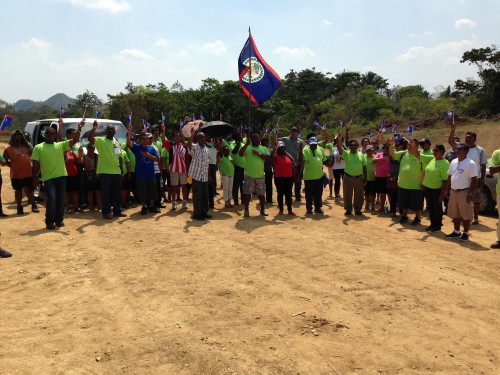 Illegal farming by Guatemalans continues to be reported at that location, but there is also robust cross-border trade and migration between Jalacte, Belize and the nearest Guatemalan village, Santa Cruz.

Through their statement at Jalacte, the BNTU has now begun a process of public awareness, to be led by the country’s educators.

He said that they are concerned about reports of Guatemala military aggression against Belizean military, and they believe it is time they stand together for Belize.

Sho lives in Pueblo Viejo, about 6 miles (or a 15-minute drive) from the Belize-Guatemala border. He said that Jalacte was a good place to start the initiative, since there is not enough monitoring or supervision of what is happening in those areas, especially as it relates to trade.

He said that some Guatemalans have been farming and undertaking construction on the Belize side of the border and it appears that people are turning a blind eye to it.

(Amandala thanks PGTV for assistance with this report as well as for the accompanying photos.)