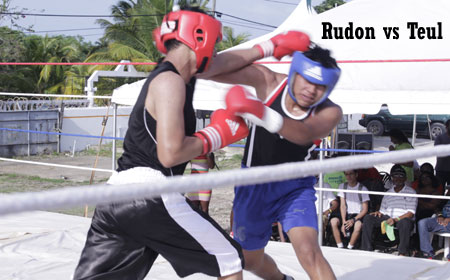 BELIZE CITY, Thurs. July 16, 2015–Promoter Clinton Tucker, manager of Lions Den Gym Belize City, told our sports desk today that over a hundred boxing fans turned out to witness a first of its kind, Boxing Expo at Wing Stop on the Philip Goldson (Northern) Highway, which got under way at 1:30 p.m. on Saturday, July 11, and entertained fans until around 5:00 p.m.

“We apologize for the delay in getting started,” said Tucker, “due to some difficulties in setting up the ring.” The event was scheduled to start at 10:00 a.m. “But we consider it a success, because it is not about making money right now, but just keeping the boxers busy and showcasing regular boxing events for the fans. It’s about development right now.”

The afternoon kicked off with an exhibition of skills by ten-year-old Tasiyana Tucker of Lions Den Belize, which was followed by 10 bouts, 9 competitive and 1 exhibition, as follows: