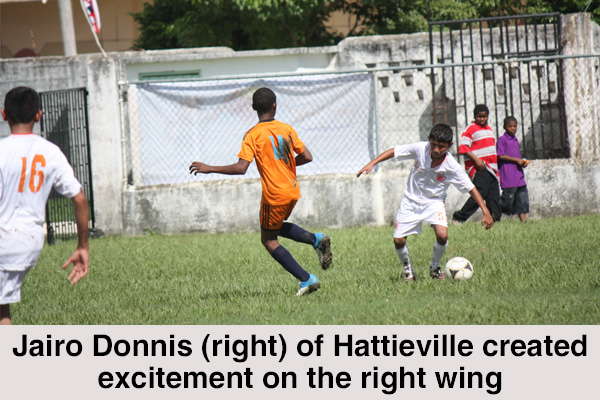 The games were not played on Saturday, due to the wet condition of the MCC Grounds, but the all-clear was given yesterday, Sunday, November 17, for most of the Week 7 games in the SMART 13 & Under Football Tournament to be played. Three games were actually played, as one was determined by default, while another will be played as a back match. The postponement from Saturday to Sunday may have affected some teams more than others. Ladyville Jaguars coach Michael “Wataplat” Flowers said his team missed two of his best defenders, who had to attend church in Ladyville on Sunday morning and could therefore not make the trip to Belize City.

In the first game on the schedule, City Boys won by default (3-0) over Young Stars. Collet Strikers then dropped Ladyville Jaguars, 2-1, on a goal apiece from Wayne Ford and Tyrel Estrada; while Joshua Martells got the goal for Ladyville, who suffered their first loss in the competition. Next it was defending champion Hattieville United with an impressive 3-0 win over Third World, with Jairo Donis, Edil Lemus and Jadon McGregor each shaking the net for Hattieville. Still undefeated and tournament leading Brown Bombers, coached by Ms. Shanell Gentle, then clinched their spot in the playoffs with a 2-1 victory over Rising Stars, another Ladyville based team, coached by Daniel “Sundance” Smith. Sherwin Requena struck twice (2 goals) for Brown Bombers, while Hakeem Smith hit the target for Rising Stars. The Belize Elementary vs Survivors game was not played; this will be a backmatch.

With only 2 games remaining to complete their 9-game single round-robin, Brown Bombers, with 19 points, is already assured of a spot in the 4-team knockout semifinal playoffs, as only 1 team, City Boys, at 15 points, has a mathematical chance of eclipsing Brown Bombers’ total. (See standings below.)

For some other teams, the remaining 2 games will be critical in determining who makes the playoffs. In this regard, the backmatch between Belize Elementary and Survivors will not have any impact, as both are already out of the playoff race.