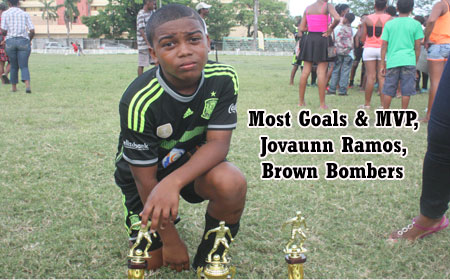 BELIZE CITY, Mon. July 13, 2015–It must be a first in Belize football competition history, although it wasn’t “association football,” there being no active Belize District Football Association, but the Brown Bombers maintained their unblemished record with no goals allowed for the entire regular season and playoffs, as they clinched the Smart 13 & Under Football Championship 2015 yesterday at the MCC Grounds with a 2-nil victory over a gallant Young Warriors team, who were first time participants in the tournament. There were 12 teams in this, the fourth edition of the Smart 13 & Under, and the top four teams in the single round-robin regular season entered the knockout semifinals last Saturday, July 4, with the 3rd place game and the championship finals being played on Sunday, July 12.

The afternoon began with the third place game between Ladyville Jaguars and Collet Strikers, and it was an exciting one indeed. Talented Jaguars striker D’Jon Canelo gave his team the 1-nil lead mid-way through the second half; but it wasn’t enough. Five minutes later, a penalty was awarded to Collet, and Shemar Gillett converted to tie things up at 1-1. But in the second half of overtime, the heavily marked Canelo again came up with a brilliant goal, shaking off two defenders on the left wing, and utterly destabilizing the oncoming goalkeeper, before calmly driving home what proved the game winner, 2-1, for the Jaguars. 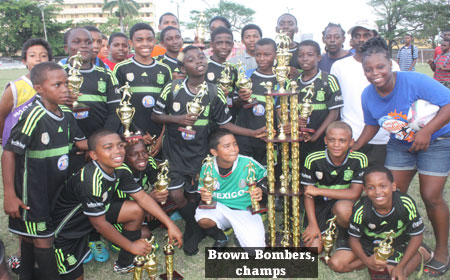 Next was a fun exhibition between the coaches and the officials that ended in a 2-2 draw. Ladyville Jaguars coach, Michael “Wataplat” Flowers, a.k.a. the Buzzer Beater, got the first goal for the coaches, and highly skilled Shawn Roches, coach of Charlston Strikers, made it 2-nil; but the officials came back with a goal from former FC Belize star Tyrone “T-Bone” Muschamp, and a penalty conversion by young Shaheem “Cheezy” Loague, to tie it up, 2-2.

A number of fans came out to witness the big championship final between two undefeated teams, Brown Bombers and Young Warriors, who had drawn, 0-0, in their regular season meeting. In regular season, the Bombers had tallied 30 goals while giving up none, winning 9 games and drawing 2; while Young Warriors scored only 8 goals and gave up 2, on their way to 4 wins and 7 draws. 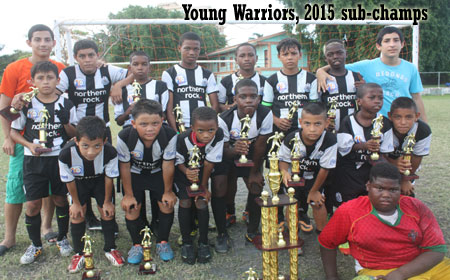 The rules require that all players must see action, and there are tactics involved in the utilization and timing of player substitutions. Five minutes into the action, Bombers’ coach Shanell Gentle wasted no time in bringing in two of her star players, Eshaq King and Eldon “Tuncy” Byrd; and the changes immediately paid off, as their top striker, Jovaunn Ramos got a breakaway opportunity on the right wing, and he proved why he is the top goal scorer, as his shot high in the left corner beat sturdy goalkeeper Richard Williams, giving the Bombers the 1-nil lead. Immediately, coach Shanell sent Ramos, her best player, to defence to protect the 1-nil lead, as she had done the previous week in the semifinal against Ladyville Jaguars. But when Bombers’ midfield/striker Elden “Tuncy” Byrd was cut down in the eighteen, Shanell was taking no chances, sending Ramos to convert; and it was 2-nil, Brown Bombers. 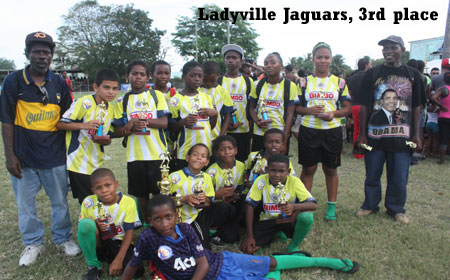 Tempers flared on a couple occasions during the match, and the Young Warriors lost two players to red cards by referee Patrick Robinson, one right after the penalty was called. The short-staffed Warriors squad tried to make a game of it, but the Bombers kept their “no-goals against” record intact for the 2-0 win and the championship.