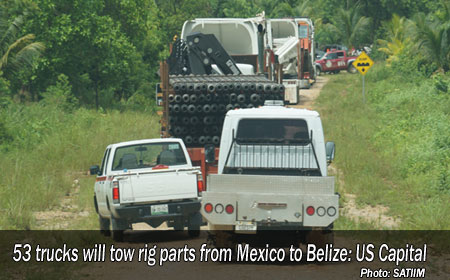 TOLEDO, Mon. Feb. 9, 2015–US Capital Energy has packed up its drill rig and shipped it back to Mexico, but Alistair King, the representative of US Capital Energy in Belize, told Amandala today that “it’s not over until it’s over!” and they intend to import other equipment that would allow them to drill a bit further, as well as perform the kind of appraisal tests they wish to undertake in the months ahead.

US Capital Energy commenced drilling in the latter half of 2014, but to date it has not declared a commercial oil find.

Director of Geology and Petroleum, Andre Cho, told our newspaper today that US Capital wants to go deeper to check out the geological formations, and that they are being allowed to bring in new equipment from Mexico to undertake further exploratory works.

“We released the rig that we had drilling there. It had done its job. We are waiting on specialized equipment to do some further testing,” King told us.

He said that they had drilled beyond 9,000 feet, and they intend to soon use “a specialized testing tool” to assess the current well.

As we have previously reported, that site is located within the Sarstoon-Temash National Park (STNP), in Toledo, southern Belize.

King said that they will be testing for gases as well as signs of oil at different stages of the drilling operation.

He said that exploration at the other drill sites won’t proceed at this stage, because they will “have to make decisions based on how successful or unsuccessful this one is.”