Home Sports If not “Chow,” who scored BDF’s first goal on Sunday?
Sports

If not “Chow,” who scored BDF’s first goal on Sunday? 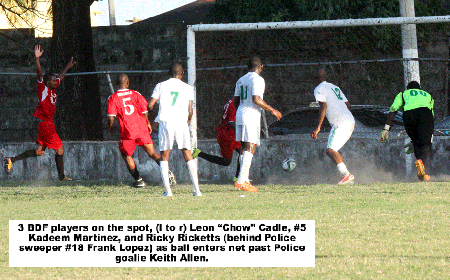 BELIZE CITY, Thurs. Feb. 25, 2016–Our apologies for the confusion following the report in our mid-week issue with the name of the scorer of BDF’s first goal on Sunday, when they were trailing Police United 2-nil at the MCC Grounds in Belize City. Our vision partly obstructed at the time by a cloud of dust in front of the southern goal at the MCC, we had assigned the goal to Leon “Chow” Cadle. A BDF fan called in to the Press Cadogan Sports Show on Krem Radio last night and said it was Ricky Ricketts that had scored that first goal for BDF; and today, BDF coach Jerome Serrano concurred that Rickets scored their first goal. But the official Premier League of Belize (PLB) game report, which came out on Wednesday near midday, has Kadeem Martinez scoring BDF’s first goal at the 80th minute. Kadeem had entered the game in second half to replace Mexican import William Briceno in midfield.

After BDF had lost defender Orland Trapp to a red card at the 5th minute of play, Police United took the lead in first half through Devon Makin (36’), and increased their lead through Harrison “Cafu” Roches (63’), before the 10-man BDF mounted a comeback with Kadeem Martinez* (80’) and Harrison Tasher (87’) scoring, to secure the 2-2 draw.

The 2-2 draw, after leading 2-nil over 10-man BDF, was a major setback to Police United plans to secure their CONCACAF Champions League berth early by winning the combined regular seasons points race, in which they are presently tied with arch-rivals Belmopan Bandits. (See current Closing Season standings and combined Open & Closing regular season totals below.)

In the other Week 5 games last weekend, Placencia Assassins and Belmopan Bandits drew 0-0 in Independence on Saturday night; and Wagiya got a 27th minute goal from Jose Martinez to upset home standing Verdes FC, 1-nil, at the Norman Broaster Stadium on Sunday.