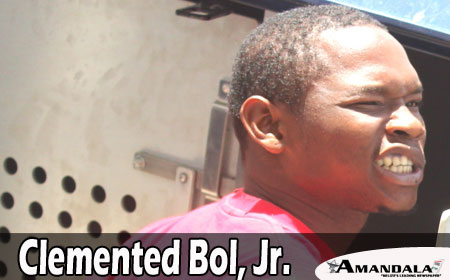 BELIZE CITY–Clement Bol, 23, the man who is accused of the gruesome August 2 murder of Chryslin Gladden, 16, a recent graduate and honor student of Wesley College, returned to court today, along with a 17-year-old girl with whom he is charged for the savage murder.

Under the prevailing rules of our judicial system, the two accused will make a number of trips to the Magistrate’s Court for adjournments until the prosecutor is ready for the court to hear the preliminary inquiry that will determine if there is enough evidence against the accused for the case to be sent to the Supreme Court for trial on indictment.

Bol and the minor appeared before Chief Magistrate Ann Marie Smith, who adjourned the case to October 24, 2014. The 17-year-old minor is being represented by attorney Ellis Arnold, S.C., who was present for today’s adjournment. Bol remains unrepresented since his arraignment on the murder charge.

Gladden’s relatives also appeared in court, as well as the mother of the minor.

On the morning of Saturday, August 2, Chryslin Gladden, who had not gone back home to her Neal Pen Road home the previous night, was found dead on the ground beside a grave at the Lord Ridge Cemetery.

Gladden’s body had multiple stab wounds to the face and neck. According to the autopsy report that was done on her body, the stab wound to the neck proved to be fatal.

Police investigators moved swiftly and the two accused were booked on the murder charge. According to police, the motive for the murder of Gladden, a promising student who had already registered to attend the University of Belize, was jealousy.

Four days after she was murdered, hundreds of her friends, along with her family members, took to the streets of Belize City to honor her memory and call for an end to the murderous violence plaguing the city.