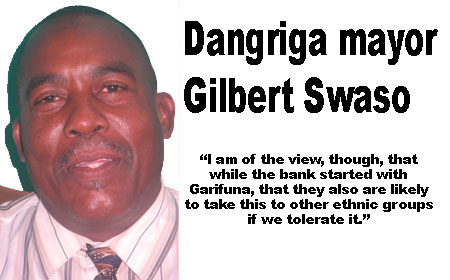 “I am of the view, though, that while the bank started with Garifuna, that they also are likely to take this to other ethnic groups if we tolerate it,” says Mayor Swaso

DANGRIGA–Glen Smith, country manager for CIBC FirstCaribbean International Bank in Belize, confirmed to Amandala this evening that the manager of the bank’s Dangriga branch has been transferred but not suspended, pending the outcome of the bank’s investigations into reports that Garifuna staff at that branch were fettered in the use of their native language.

Amandala received reports that Roxan Bowen of Jamaica, who has been heading the Dangriga branch, has been temporarily removed from that position, and Smith told us that Arlette Trapp will be holding over, since Bowen, who will work on “projects,” has not been permanently reassigned.

Meanwhile, Dangriga Mayor, Gilbert Swaso told Amandala tonight that a coalition is seeking legal counsel with the view of exploring legal recourse for what he deems to be a discriminatory policy which, if tolerated, could impact all ethnic groups in Belize who speak a language other than English.

That coalition, which has deemed it necessary to speak with one voice, includes the National Garifuna Council, Ligemeri Dangriga, the Garifuna Development Organization, the United Garifuna Association (of New York), All The People Foundation (Chicago), as well as individuals concerned about the reports of discrimination against the speaking of Garifuna.

According to Mayor Swaso, the coalition, still unnamed, has met three times in Dangriga, and they are hoping to firm up their legal position by the end of the week.

Swaso does not deem the transfer of Bowen to FirstCaribbean in Belize City to be any form of appeasement, but a good sense decision in view of the hostility Bowen may experience in the town given the recent sequence of events. An internal memo indicated that Bowen was transferred due to safety concerns.

“We believe on the face of it, it is suggesting there is human rights violations, constitutional violation, certainly discrimination… on behalf of Garifunadüaü in general,” the Dangriga mayor said, in explaining their plans to seek legal redress.

He said that they are of the opinion that what happened to Uwahnie Martinez, who recently resigned after the language issue exploded in the Dangriga branch, “was just the tip of the iceberg.”

“The intent is to demonstrate that we will not in any way or form tolerate any form of discrimination,” Swaso said.

“I am of the view, though, that while the bank started with Garifuna that they also are likely to take this to other ethnic groups if we tolerate it. We are taking a stand for all ethnic groups within the country. It is a national issue more than anything else,” Swaso added.

Speaking with Amandala today, Uwahnie detailed the sequence of events which led to her resignation from the bank in August 2014. It began, she said, with a dispute over Social Security payments for approved sick leave: $132 which she said she had to refund to the bank, although she had submitted her leave form in time. The matter went to appeal and through what she described as an internal kangaroo court, after she appealed the matter and was cited on allegations of insubordination.

Following that was a dispute over a failing performance appraisal, which the Christian Workers Union said remains an unresolved issue they have with the bank. Martinez said that while they sold fewer loans in 2013 than they usually do, it was due to economic conditions which put challenges on the banking sector. She told us that generally speaking, loans officers at other institutions sold less than she did and yet received assurances on their performance appraisal that they had met expectations.

Martinez and Simeon Joseph are the only two Garifuna-speaking staff members at the Dangriga branch, and they both work in the loans section. She said that they had embarked on a heavy sales campaign and coached other staff as well. According to Martinez, she was one of the top lenders nationally for 2013 and found out that her appraisal was less than expected because an issue was made of her “attitude.” Martinez said that both she and Joseph were assigned “below standard” ratings.

CIBC FirstCaribbean has declined to discuss the particulars of employee matters, and Smith reiterated to us today, when we asked where Bowen would be transferred to, that he could not divulge those kinds of details, because they are private and confidential matters.

Martinez told us today that although she had been facing internal issues with the bank’s management, she had intended to work to meet their expectations and she tried to become what they wanted her to become. The issue of the language use in the bank arose more recently, she told us.

According to Martinez, Bowen had indicated to them that when customers greet them off the cue, while staff members are working at their cubicle, they should invite them to their cubicles if the conversation becomes lengthy. Martinez said that she understood that to be reasonable.

A few months later, she saw the local manager watching her from behind a teller while a customer conversed with her. Afterwards, the manager asked to see her in the office and that is when, according to Martinez, the local manager disclosed what she claimed was the bank’s language policy—one which the bank has publicly denied.

Martinez said that the manager “gloated” that “the head office had authorized and is in agreement with upper management in Belize City that English is the only language to be spoken in here.”

She said she had intended on complying rather than getting into a back and forth over the issue. However, that disclosure also prompted her to write a resignation letter, which she had in her purse but did not tender until days later.

“Two days later, a customer came in and he did the usual,” Martinez recollected.

She said that the customer called her off the cue in Garifuna, and she called and told him that he can’t greet her in Garifuna off the line, that she would not be able to respond given the policy of the bank.

“The customer roared,” she said, adding that this second incident is what sealed her decision to resign from the bank.

Meanwhile, the protesting customer later contacted Garifuna organizations at home and overseas, including some of those which now form the coalition which is considering seeking legal redress over the matter.

They take particular issue with the fact that the bank, although it has said it is investigating, has not apologized. In a public statement, CIBC FirstCaribbean had apologized for the misunderstanding it says had arisen over language use.

Today, Smith, the bank’s country manager, told us that the bank is working on putting its policy in writing, and it intends to engage its stakeholders, given that it operates in 17 territories.

Martinez said that while she has lingering concerns about internal relations issues, such as her last performance appraisal, she has decided to pick her battles and that battle will now focus on the speaking of Garifuna.

We asked her whether she is contemplating court action against the bank, and she said that she has not yet decided what, if any such actions, she would pursue.