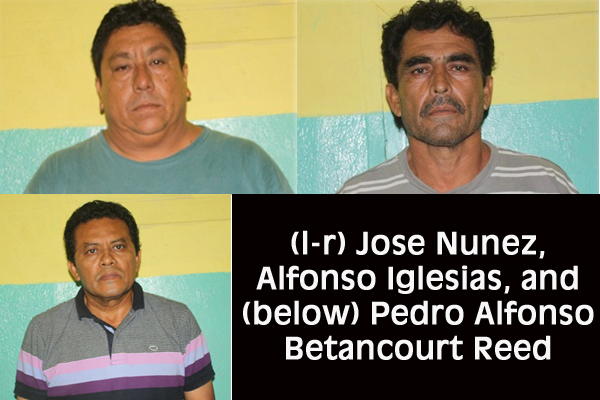 2 Belizeans and a Mexican walk; police refuse to say what exactly the “powder” substance was

Two Belizeans and a Mexican walked out of the Corozal Magistrate’s Court today as free men after the cocaine drug trafficking case against them fell apart when the police’s National Forensics found that the supposed cocaine was not cocaine at all, but an unspecified powder.

The men were charged with trafficking 400 grams of cocaine.

The police said that it “was not an illicit substance,” and when contacted by Amandala as to exactly what the powder substance was determined to be, Amandala was told by a high official that no further comment would be made on the matter.

The vehicle, which belonged to Reed and in which the alleged drugs were found, was returned to him by the Corozal police.

Police contend that about 6:30 p.m. on Sunday, October 7 of last year, they were on mobile patrol in Baeza’s Layout in Corozal and saw a SUV parked in front of C&B’s Bar; they conducted a routine search.

The men were immediately taken into custody, and the SUV taken to the Corozal Police Station. In the station, further searches were conducted on the vehicle, and police said that in this second search they found another black plastic bag under the passenger seat containing twelve small plastic bags with cocaine. The drugs were all weighed, and they amounted to about 400 grams.

The men were then jointly charged with drug trafficking.

However, the case for the prosecution fell apart when the drugs reportedly tested negative for cocaine.

The drugs normally are kept in the Formation Exhibit Rooms in the police station in the district before being sent to National Forensics for testing.