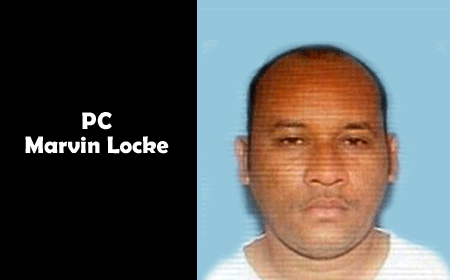 His assassin hugged him, then stabbed him

BELIZE CITY, Mon. Mar. 27, 2017–On Sunday afternoon the unthinkable happened at the Racoon Street Police Station in Belize City. A police constable was stabbed to death by a civilian in what Assistant Commissioner of Police (ACP) Chester Williams dubbed, “a crime of passion.” Williams, however, did not go into specifics.

At around 3 p.m. Honduran national Marcial Toledo, 47, visited the station in search of PC Marvin Locke, 49. Locke had reportedly been out on patrol, but when he returned to the station, Toledo was waiting for him.

He and Toledo reportedly engaged in a conversation while inside the station, but as they walked outside the station building, Toledo took out a knife, hugged Locke like a friend, and stabbed him multiple times in the chest and abdomen.

According to our sources, Locke fell to the ground, but Toledo stood over him and continued to stab him.

Unarmed officers on duty attempted to subdue Toledo, but he swung his knife at them. He was not subdued until an officer struck him on the head with a cement block.

Marvin Locke was thereafter rushed to the Karl Heusner Memorial Hospital (KHMH), where he succumbed to his injuries while receiving treatment at around 5 p.m.

Toledo was treated for his injuries at the KHMH and is currently in custody. ACP Williams said tonight that he will be charged with murder.

ACP Williams told us that this incident happened very quickly. He added, “From the looks of it, everything appeared casual between PC Locke and the individual when they spoke inside the station. When they got outside, that was when the man manifested a totally different behavior.”

Though this incident ended fatally, Williams told the media that, “I will commend the officers for acting swiftly. Yes, it was still too late for the police, but at least we have the suspect in custody and he will be dealt with.”

According to Locke’s sister, Sylvia Foreman, this is yet another tragedy for her family. She told us that her mother and sister both lost their homes in Majestic Alley to the fire on Friday evening. Additionally, she told us that about six months ago, her nephew, George McKenzie, Jr., was stabbed to death.

According to Foreman, she and Locke were very close and that she had spoken with him over the phone the morning of his death. She told our newspaper that her brother did not tell her that he had been involved in any dispute with anyone.

“My brother was not a troublesome person; he was a work-to-home guy,” she told us.

However, a search of his phone revealed that he received a text message about three hours before his death, saying that someone wanted him dead.

According to Sylvia Foreman, she is unable to confirm that her brother’s death was a “crime of passion,” because he lived alone since his wife had died of cancer almost 6 years ago.

With Locke’s death, the Belize Police Department is now seeking to adopt new security measures. According to ACP Williams, “I am looking at some of the models we saw in police departments abroad where anyone who enters the police station, there is a metal detector and you have to empty your pockets and everything before you go in, that is a system that we are looking at to ensure we have safety when anyone comes into the police station.”

Marvin Locke leaves behind 5 children and his mother and two sisters. Efforts are underway to have his funeral at the St. Mary’s Church in Belize City on Saturday, April 1.