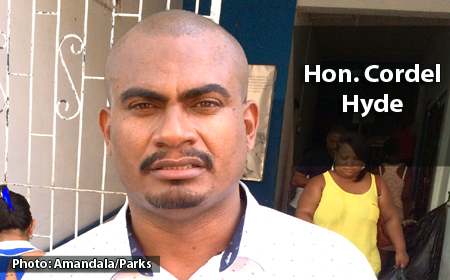 BELIZE CITY, Sat. Jan. 9, 2016–The Opposition People’s United Party held a meeting of its National Party Council on Saturday morning to work out the operational ground rules for its January 31 national convention. All candidates aspiring to fill the party’s vacant executive posts, including the three men campaigning for the position of party leader, converged at their Independence Hall headquarters with an estimated 200 out of the 3,000 delegates who will cast their ballots at the upcoming convention.

Francis Fonseca—the PUP leader who resigned and announced that he would not seek another term as area representative for the Freetown Division, but who was apparently coaxed into running for the leadership post—declined our request for comments, saying, “The chairman will speak.”

John Briceño also declined to comment on how his bid to return to the leadership position is taking shape and bid us, “Happy New Year!” before he walked away.

“We ratified the decision taken by the National Executive to have the National Convention on 31 January in Belmopan. Those were matters that were submitted,” he stated.

Usher said there was only one resolution passed to amend the Constitution so that it states that the four deputy party leaders represent four regions: the north, south, east and west.

Asked if public bloodletting by some PUP supporters had been addressed at the meeting, Usher replied, “That matter has been addressed and we have someone looking into that with a view to curb it. Everyone have a right to free speech, but we want to conduct ourselves civilly and try to respect each other as much as possible.”

There have been blistering attacks on Hyde and Briceño on social media from persons suspected to be Fonseca loyalists. The attacks continue, notwithstanding Usher’s statement that someone from the party is looking into that behavior.

Usher, who is being challenged as party chairman by Toledo West area representative, Oscar Requeña, said that he has done his work and he thinks that the delegates will look favorably on him and return him as chairman of the party.

“I am very confident of securing my seat again. And, of course, whoever wins as leader, I am prepared to serve,” Usher said.

Since the nomination of the various candidates in December, only Cordel Hyde has broken his silence.

Hyde said Saturday that he has been busy meeting with delegates. He said that he was heading right after the meeting for Benque Viejo Town, and he would be meeting delegates right up to convention day.

“That’s where the elections will be decided. They have a very serious responsibility to those who came before us, and to those 67,000 people who voted for us on November 4,” Hyde commented.

Hyde said that he is “pretty confident” going into any election.