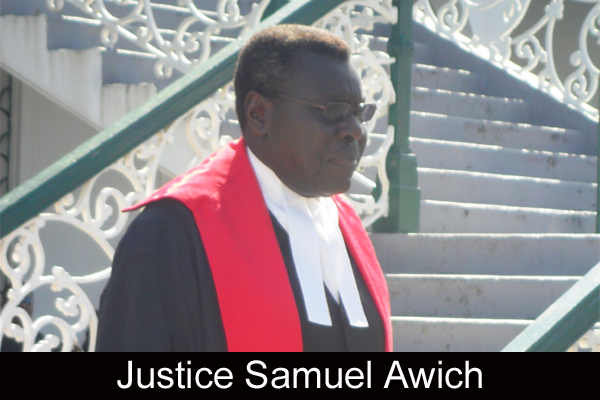 Court of Appeal declines request of “Ashcroft-Fortis Alliance” for recusal of Justice Samuel Awich on BTL case; GOB continues to insist on sanctity of Eighth Amendment

President of the Belize Court of Appeal, Manuel Sosa, and Justices Samuel Awich and Douglas Mendes were greeted this morning by two Queen’s Counsels, three Senior Counsels, a coterie of other attorneys and mountains of paper.

The Government of Belize (represented by the Attorney General and Minister of Public Utilities) today began its appeal against the June, 2012 decision of Supreme Court Justice Oswell Legall to strike down the majority of the 2011 Acquisition Act and Order in relation to Belize Telemedia Limited (BTL) on the opening day of the final session of the year 2012 for the Court.

Ten attorneys – three for the Government and a total of seven for the responding parties – appeared in court this morning. They are: for the Attorney General and Minister of Public Utilities in all cases, Senior Counsel Denys Barrow and attorneys Magali Perdomo and Illiana Swift; for the British Caribbean Bank (BCB) Limited, Queen’s Counsel Nigel Pleming, Senior Counsel Eamon Courtenay and Ashanti Arthurs-Martin and Pricilla Banner; and for the BTL Employees’ Trust and chief trustee and former BTL chairman Dean Boyce, Lord Peter Goldsmith QC, Godfrey Smith SC and Magali Marin-Young. (Courtenay and Martin also appear for Fortis Energy International (Belize) Inc., which is suing the same parties – the Attorney General and the Minister of Public Utilities – in the first two appeals).

The Government seeks to reverse Justice Legall’s June ruling, which declared the majority of the provisions of the 2011 Act and Order and the Eighth Amendment invalid and unconstitutional, but recognized the Government’s hold over the company and ordered the sides to discuss compensation rather than make a decision as to relief for the applicants, the Bank and the Employees’ Trust.

British Caribbean Bank and the BTL Employees Trust are appealing that part of the decision, while the Government appeals the entire decision. Fortis joins the application in the Court of Appeal for the first time, as their case with Belize Electricity Limited (BEL) has to do with the application of the Eighth Amendment to control by Government of all public utilities, including electricity.

The Court’s members also this morning had to deal with an application by Pleming for the recusal of Justice Awich, a former Supreme Court Justice and briefly Acting Chief Justice after the departure of Dr. Abdulai Conteh in 2010, from the case.

Appointed to the Court of Appeal after much controversy in April, Justice Awich was apparently named to the deciding panel for the case over the objections of the respondents (Lord Ashcroft himself, Dean Boyce and one other), who had written Chief Justice Kenneth Benjamin, Awich’s former boss, as chair of the Judicial and Legal Services Commission (JLSC) on July 17, requesting that Awich be removed from office and insisting that he should not have been appointed, and then to the Registrar of the Court of Appeal on August 10, requesting that Awich recuse himself from this case pending a response from the JLSC, which is pending.

In open court, Justice Awich stated that he had received a copy of the letter to the JLSC and that the JLSC had written him requesting comment by October 19, to which he intends to respond, but said he would not see it necessary to formally announce his position in this arena.

After Barrow told the court that in his view, it was a matter for Justice Awich to decide, the Court recessed, and just before noon they returned, announcing that by a majority decision, it was decided that the application by Pleming was refused and Justice Awich would continue on the case.

Earlier, Pleming had said that Awich’s presence, despite considerations of “apparent bias” on his part, would result in a potential ground of appeal were the decision not to go their way.

After the afternoon adjournment, Barrow began the Government’s case, responding to the various challenges of his opponents to his contention that the acquisitions “were in fact validated or given constitutional strength by the Eighth Amendment to the Constitution, which you will recall caused a great deal of discussion, anxiety, differences and discussion in the country of Belize, and we are saying that the effect of that Eighth Amendment was to put that acquisition beyond controversy, beyond dispute, beyond challenge…”

The other side argues that there are limitations, both explicit and implicit, on the lawmaking powers of the Government as granted them in Section 68 of the Constitution, that asks that laws be made “for the peace, order and good government of Belize,” and on alteration of the Constitution.

As proof that governments have altered any provision of the Constitution in their countries, Barrow cited Trinidad and Tobago’s complete repeal of its 1962 Constitution in 1976 when it became a republic, and Guyana’s similar maneuver several years earlier.

The “acquisition” done in the Act and Order, Barrow explained, was really a “description” of the property GOB sought to acquire, and had no legal effect when published; but the actual acquisition was in the “vesting” of the property which actually transfers its title as enshrined in the Eighth Amendment. Because the Eighth Amendment is a part of the Constitution, Barrow argued, it cannot be challenged under the “any other law” provision of Section 2 of the Constitution, which voids any other law inconsistent with the Constitution to the extent of its inconsistency.

In reply late this evening, Lord Goldsmith registered his clients’ intention to apply for consequential relief to be determined at the Court’s leisure in addition to their main relief, the return of the shares in the company.

Rather than appeal the 2011 decision of the Court of Appeal overturning Justice Legall’s earlier 2010 decision, Lord Goldsmith stated, the Government rushed back to Parliament, trying to overturn the decision by means of new legislation, which he contended was really the same legislation intended to “retain” the property that the Court of Appeal had already ruled was illegally taken.

Lord Goldsmith said in court that Prime Minister Dean Barrow had conceded in a television interview around the time of the 2011 acquisition and introduction of the Eighth Amendment that it would be difficult for the Government to change the purpose for which it tried to acquire the property in 2009 in 2011, but had insisted that it would nonetheless be safe, through the “colorable device,” as Lord Goldsmith put it, of the Eighth Amendment, amended in August to remove explicit language denying the possibility of challenge in court.

But by now arguing that the Amendment was still safe from court challenge, said Lord Goldsmith, the Government showed “a serious disconnect” between what the Belizean people were told and what the Court was now hearing – and the Government had rejected a chance to learn what the people of Belize really thought by means of the “Friends of Belize” petition which failed days before the Amendment was passed, and is now also before the courts.

Barrow told reporters afterward that Goldsmith has to take the position he does in relation to the acquisition, because “otherwise he would have to accept that the acquisition, which was done over in 2011, for differently stated reasons, are to be judged by those reasons. And what he is saying is, ‘You stated reasons in 2009, so whatever you state in 2011, you are bound by what you said in 2009.’ We, of course, do not accept that.”

The case continues tomorrow morning, Tuesday, at 9:00 a.m., and will be heard through Wednesday.

Other major cases to be heard in this session include appeals from the five men accused of conspiracy to murder, and the robbing of businessman Jose Shoman; twice-convicted murderers Leslie Pipersburgh and Patrick Robateau; former cop Marlon Harris, convicted of extortion; convicted murderers Clarence Hemmans, Nelson Gibson, Orlando Wade and Darrell Grant; and on the civil side, appeals from Stephen Okeke against the University of Belize and Rhett Fuller against the Attorney General and Minister of Foreign Affairs.

I got the opportunity to be a card-carrying member of the United Democratic Party in 1998, after their massive defeat by the People’s United...
Read more
Headline

The document points to text messages between Minister John Saldivar and Jacob Kingston, who pleaded guilty to defrauding the IRS of US$511 million and...
Read more
Features

Belize City: Jan 21, 2020: — Recently I have been writing articles in Belize’s leading newspaper – Amandala, in which I have been trying...
Read more
- Advertisment -