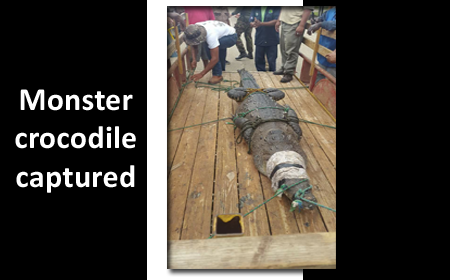 BELIZE CITY, Tues. March 14, 2017–A crocodile measuring about 10 feet in length and weighing about 300 pounds, that had been causing the residents of Belama Phase 2 in Belize City much anxiety, was captured this morning by the American Crocodiles Education and Sanctuary of Ladyville, in collaboration with the Forestry Department.

The croc was captured at about 5:30 this morning and then taken away to the croc sanctuary in Ladyville, removing it out of the area and giving the residents some peace of mind.

Chris Sommers of the crocodile sanctuary reported that the croc crossed the road at about 7:00 at night and again at about 5:00 in the morning. They went to the area at about 7:00 last evening, but the croc had already crossed.

Officials returned this morning, setting their trap, and caught him.

Sommers says that members of the public should never feed crocodiles, because they will then lose their fear of humans and will attack them.

Residents of Belama Phase 2 said that they are relieved, and hope that there are no more crocs in the area.

City Councilor Phillip Willoughby said that he was told of the presence of the animal in Belama, and since they are conducting a flood mitigation project in the area, the river edges will be cleared and a trap set to ensure that crocs do not go to the area.