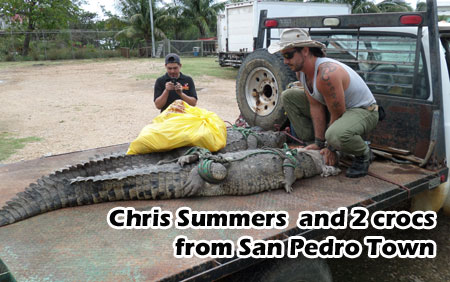 The two crocodiles, each weighing around 250 pounds, are about 9 feet in length. The crocodiles were put onboard a boat from San Pedro, which docked at the wharf in the Haulover Creek, near Quality Poultry store on North Front Street.

Summers said that the transfer was done to prevent the crocodiles from attacking and killing humans because they have been fed by people, and might become aggressive and lose their fear of humans.

Crocodiles should not be fed either directly or indirectly (by throwing food into an area where they are known to be living) by humans, Summers explained.

Summers said that feeding crocs is against the law and against the nature of crocodiles. When they are fed, they gravitate towards the source of food. He said that under no circumstances should they be fed, because feeding them changes their nature.

When the ACES Sanctuary in Ladyville is completed, they will carry out an educational program, he said.

According to Summers, at 9 feet, the crocodiles are considered small, but they can still be dangerous if encountered in the water.

Some days before He was destined to die on the cross, Jesus the Christ, on being challenged for allowing Mary of Bethany to anoint...
Read more
Features

Now, for quite some time, I watched silently in utter dismay and sheer disbelief as dey pippl di try abstract the very good and...
Read more
Features

SIB report on state of economy

Belize’s GDP contracted 14% in 2020 Preliminary estimates from the SIB show that our annual GDP, the total value of goods and services produced in...
Read more
- Advertisment -