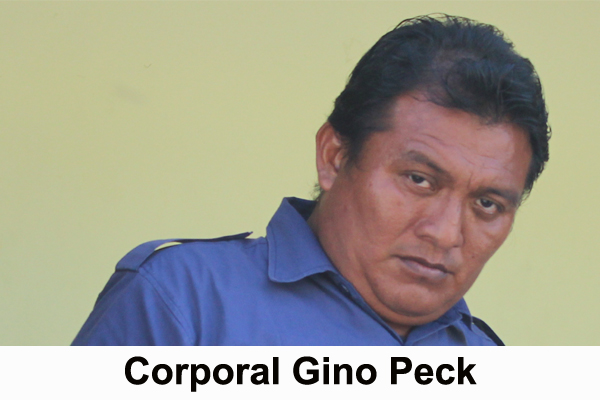 Corporal Geno Peck’s conviction on Monday in the Magistrate’s Court for possession of unlicensed ammunition has opened a new chapter in the debate on the Firearms Act and the harsh penalties it stipulates.

Corporal Peck has been remanded to prison and is awaiting sentencing tomorrow, Friday. Under the provisions of the law, he can be sentenced to up to eight years in prison for keeping unlicensed ammunition and prohibited ammunition – the charges for which he was convicted.

Peck, a veteran police officer for 22 years and reportedly a sterling family man, sent word to his wife Loretta, via a text message, that he had been found guilty.

The guilty verdict has hit the family hard. Loretta Peck told 7 News: “In the text he said, ‘Love, they found me guilty; please don’t cry – God is on our side.’”

She said the text message was hard, because she had to read it to their kids. An adopted son of Peck’s has told the media how hard it was to attend to his studies with the sentencing of his father foremost in his mind.

Loretta said several senior police officers have called her to tell her that the entire Police Department is behind her husband and family.

Meanwhile, Citizens Organized for Liberty through Action (COLA), an activist organization, said in a press release today that, “Corporal Peck, whom to our knowledge is a respected and well-liked officer, is the latest example of the double standard practiced by the authorities. From start to finish, the pursuit of Corporal Peck by the Gang Suppression Unit (GSU) bears the hallmarks of vindictiveness.

“Moreover, it highlights once again the lack of urgency in the DPP’s office with regard to prosecuting Reynaldo Verde, released nearly a month ago after a firearm was found at his premises on the flimsiest of explanations.

“We demand urgent action from the DPP in this case and ask her to recommend leniency for Corporal Peck, a father of four who has no criminal record and who has honestly and faithfully served his country and tended his family, at his sentencing on Friday.

“We also continue to monitor the case of Darrell Henry, a Belize City youth unfairly rearrested and charged and held without bail until last week, which also bears the stamp of ASP Vidal and the GSU.”

Critics of the gun law, described as draconian in many quarters, have recounted the story of a farmer who was imprisoned just because he borrowed a friend’s shotgun to deal with pests on his farm which were destroying his produce. Police reportedly met the farmer, an honest man, on his way to his farm with the shotgun, for which, understandably, he could not produce a license. Cops arrested and charged him in court. The law is making criminals of honest and innocent citizens, critics charge, not to mention the hardship it causes to their families, especially when the victim is the family’s breadwinner.

It opens saying: “The Commissioner of Police, with the support of the Ministry of National Security, hereby informs the public that the department will be supporting Corporal Peck fully, including payment of legal fees in his appeal to conviction on keeping unlicensed and prohibited ammunition.”

The release adds: “The Police Department is saddened by the manner in which the decision to proceed with criminal charges against Corporal Peck was made in January 2012, as the department is confident that it could have been properly dealt with through its own internal disciplinary process. Unfortunately, the department was not given the opportunity to handle this matter as they have customarily done.”

The Police Department’s position does not take issue with the law that mandates prison time for Peck. Instead, it laments that it was not given the opportunity to handle the Peck matter internally.

But it was a unit of the Police Department that searched, arrested and charged Peck. The Police Department’s position on the Peck issue appears to highlight the rift between the regular members of the department and the Gang Suppression Unit (GSU), which carried out the raid at Peck’s home and which insisted on prosecution in the court, a move that the Commissioner of Police apparently was unable to prevent.

The various amendments to the Firearms Act that resulted in a broad sweep of the law are often questioned by attorneys, who think that some aspects of the law conflict with the constitutional rights of citizens, especially the 90-day remand section, which also takes discretion out of the hands of magistrates in the granting of bail, ushering in a new regime of Supreme Court bail applications which must be filed by attorneys.

Attorney Audrey Matura-Shepherd told Amandala that she has had concerns about the gun law for some time now, because of the hardship that it has created for people.

“Innocent people are sometimes caught up under this law. I’ve known instances where children have been out of school, because they were in a house with adults and got caught up with this law,’’ she remarked.

Matura-Shepherd said that the law is such that it leaves no discretion at all.

In the case of Peck, it was a matter that could have been dealt with internally, she said, further commenting that this is a perfect example of how this law can be used by certain individuals to exact their own justice.

“We need to rethink it, but in a sensible way, because you don’t want the real criminals who are trafficking in guns to get away,” she went on to state.

Another attorney, Anthony Sylvestre, has also spoken out against the gun law. Sylvestre said this gun law is the most repressive and the most retrograde on the law books, and that it has dire consequences for ordinary and otherwise innocent law-abiding citizens.

“It is similar to those apartheid-era laws in South Africa which were enacted to control and oppress people. A law which makes ordinary and innocent citizens criminals and puts the onus on them, as this law does, contravenes the basic principles that are taken for granted in a democracy. The law should be amended to take away those draconian measures, which deems all persons who are present to be in possession of unlicensed firearm and ammunition and requires them to prove otherwise,” Sylvestre explained.

Amandala has tried to get Commissioner of Police Allen Whylie to comment on the aspect of the law that has convicted Corporal Peck and may send him to prison, but we have been unsuccessful.