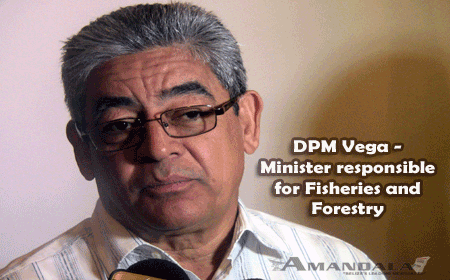 BELIZE CITY, Wed. Apr. 6, 2016–Complaints continue to come to the fore of illegal fishing and logging occurring in southern Belize—and particularly near to Belize’s border with Guatemala at the Sarstoon River, where tensions continue to be high with Guatemala’s insistence that it will exercise sovereignty over what has long been established as Belizean territory.

The matter was raised again this morning, when we interviewed a group of environmental activists on fisheries, who indicated that Belizean fishers continue to sound the alarm about illegal fishing in southern Belize.

At an event right after that interview, we met up with the minister who holds the portfolios for forestry and fisheries — Deputy Prime Minister & Minister for Agriculture, Fisheries, Forestry, the Environment and Sustainable Development, Hon. Gaspar Vega.

We raised the question of whether Belize is properly exercising its jurisdiction in policing these activities in southern Belize.

He said that at a recent meeting of Parliament, he had mentioned that there are “a lot of different NGOs that are always going to the media making an issue,” and he had invited them to openly come, not just with criticism, but with solutions, and money to help deal with the problem.

He did not address the territorial issue in answering the question, so we put it to him again, and we furthermore pointed to the history of the Sarstoon Temash Institute for Indigenous Management’s (SATIIM) role in helping to co-manage that area called the Sarstoon Temash National Park and the void that has been left since that agreement with the Government of Belize has fallen away.

We note that the falling-out happened amid the dispute between SATIIM and the Government of Belize over oil exploration inside the national park – a decision which SATIIM vigorously opposed despite Government’s adamant “drill we will” stance.

We posed the question to Vega after 11:00 Wednesday, unaware of a statement that would be released later in the day by SATIIM, decrying Guatemalan aggression against them in the Sarstoon when the Guatemalan military told the NGO’s patrol that it had to report to them before venturing on their journey on the Sarstoon, in Belizean territory.

In its statement released today, SATIIM spoke of documenting fishing and logging camps along the Temash and Sarstoon Rivers, and said that “the suspected offenders are believed to be non-Belizeans.”

Vega claimed, when we asked him about policing the area to curb illegal activity, that it’s because Government does not have the required resources.

“I don’t want to get in a back-and-forth thing. I am one that is always straight up. There’s a lot of NGOs that cry foul when you don’t approve their licenses…” said Vega, adding that the parties need to “start working together.”

“There’s only one Belize. Regardless of political parties or whatever differences we have, we only have one Belize and all of us, I imagine, will stay here for the rest of our lives. We have to work together. There’s time for politics and there’s time for whatever issues, but we have to learn to compromise, make commitments and move forward,” he said.

We asked Vega whether he supports taking the matter to the International Court of Justice (ICJ).

“At the moment, I don’t see us being able to stand by ourselves against Guatemala, so we have to be… I guess we need more information,” he said, stopping short of a definitive answer.
However, the Minister made it clear that he would rather “vote for the ICJ than vote for our BDF members to go to the border.”