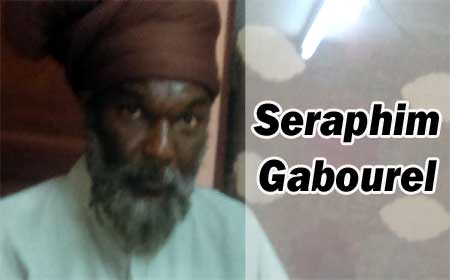 BELIZE CITY, Wed. Oct. 18, 2017–Recycled Amandala newspaper is now the raw material for a budding entrepreneurial business, which is manufacturing and selling purses and bags made from the recycled newspaper. The purses are being made in three sizes and with elegant designs.

Seraphim Gabourel, a multi-talented professional artisan, is the designer and craftsman. Gabourel said that he puts the recycled papers through a specific process, after which he varnishes them to make them strong and waterproof, after which he molds them into specific purse designs. At the end, the purses have a sleek and leathery appearance.

Gabourel also makes customized bags based on orders made by customers, so customers can specify the size and design of the bag they want. He said that a purse can be made in two days.

Gabourel said that he is instructing young men and women attending the Gateway Youth Center and Maud Williams High School, helping them to make money by using their imagination and to use common, available materials, including leaves, to make beautiful art. 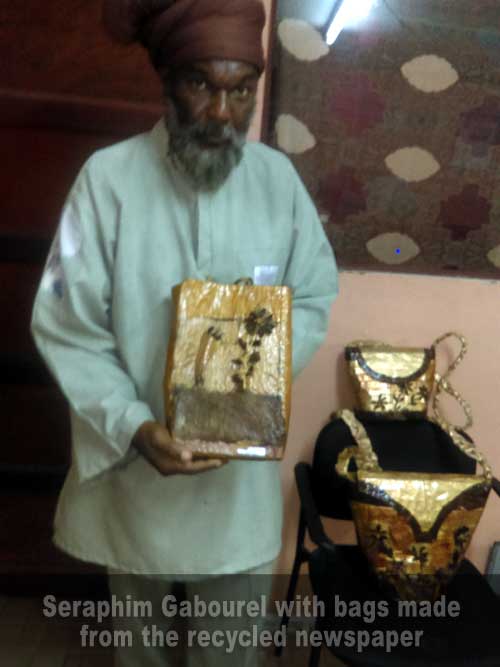 The Gateway Youth Center is located in the Gwen Lizarraga High School compound on Coffin Street, and Maud Williams High School is located on Dolphin Street.

Gabourel brought three of the bags to us for viewing, and they were well-done.

Gabourel is also a bamboo specialist. In 2005, he was sent to Guatemala on a scholarship to study the bamboo craft. He can also create tables, chairs and gift shop items from bamboo.

He is also a talented musician. His latest musical production, called “Who am I,” is being played on KREM and other radio stations, and his second musical release, called “I, Mahogany,” is available on Youtube.

His enterprise is called Face It Production Bamboo Me.