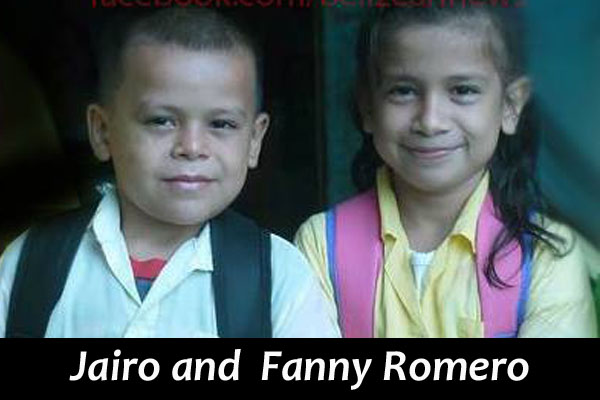 The two children – Fanny Romero, 9, and her brother, Jairo Romero, 8, of Cowpen in the Stann Creek District – who were reported missing since Wednesday, July 17, have now been found.

Their father, Felix Romero, travelled to Copan, Honduras, yesterday, Wednesday, to the home of their grandfather, where he found the children. They are now with him, and they are safe. Romero said that he is returning to Belize with them, and they are expected to be back home in Cowpen on Saturday, August 3.

The grandfather told Romero that the children followed him, and he had no choice but to take them along with him to Honduras, because he loved them, and did not want to leave them behind. However this differs sharply from another account of what reportedly transpired in Cowpen on Wednesday, July 17.

Reports to Romero were that the children were taken by their grandfather from Cowpen, to Silk Grass , where they stayed at their grandfather’s relative’s home under the pretext that they were on their way to the clinic in Dangriga to seek treatment for Fanny, who was suffering from an infected ear piercing.

Afterwards, the grandfather took them with him to Honduras.

The children were reported missing around 9:00 a.m. on Wednesday, July 17. They were last seen in the village in the company of a woman who was unknown to their family, who took them to their grandfather.

Wed. May 6, 2020 (Caribbean Culture and Lifestyle)-- Besides being the last country in the Americas to report its first coronavirus case on March...
Read more
- Advertisment -