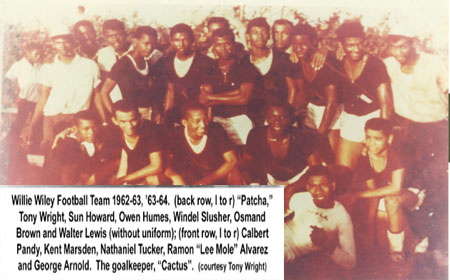 BELIZE CITY, Thurs. July 7, 2016–We got a call from Tony Wright of Krem’s Belize Musicians Past & Present last week, following an episode of our Winty J series where Winty recalls his playing on the Willie Wiley junior football team back in the early 1960’s.

Winty J didn’t mention his name among those he recalled, but Tony Wright was a member of that junior champion Willie Wiley football team, and he sent us a picture of the team, along with a list of the names of most of the players appearing in the picture. The picture is of course, not “crisp,” but you can still make out some of the faces. For “old times’ sake,” we present (above) Willie Wiley Football Team 1962-63, ’63-64, courtesy Tony Wright.

We observed that there are about four or five other individuals not in uniform, besides Walter Lewis, in the picture who posed along with the twelve uniformed team members. In fact, the tall person right behind Sun Howard could very well be Winty, who said he was probably the only south side based player on the team at the time.

We recall that later in the ‘60s, Kent Marsden went on to become goalkeeper for senior champions Landivar; and both Tony Wright and Walter Lewis played senior football on Amateur Sporting Club around 1969-70.

Tony also provided us with this little anecdote along with the picture notes:

“Ramon Alvarez was acquired also as a goalkeeper, but at his first workout with the team, Windel Slusher, the captain, discovered that he was a good striker; so he became the team’s official striker. After we won the season (63-64), he went up to senior with Independence.”