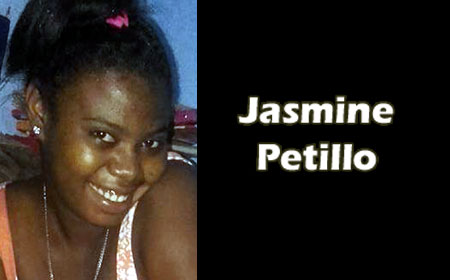 MAHOGANY HEIGHTS, Belize District, Thurs. June 30, 2016–At about 10 o’clock yesterday morning, a farmer who was walking in the bushes behind Mahogany Heights, near Mile 30 on the George Price Highway, came upon a horrific sight.

What he saw was the body of a young girl, near a ditch, semi-nude and wrapped in a quilt, with multiple stab wounds to her upper body.

Police and villagers identified the body as that of a 17-year-old girl of the village, Jasmine Petillo, who was well-known, and a leader of the Mahogany Heights Carnival Band. She was found lying face down.

Police believe that she was killed elsewhere and disposed of in that area.

Petillo’s mother told police that at about 3:00 yesterday morning, Wednesday, when she got up to get ready to go to work, her daughter was at home sleeping. She then left home and walked to the bus stop, and that was the last time she saw her daughter.

Petillo’s friends reported that she was with them on Tuesday, socializing in the village. At about 4:00 that evening, she told her friends that she was going, but would return shortly. She never went back, however.

Those who knew Jasmine Petillo are shocked and devastated. They know of no reason for her brutal murder, and mourn her loss.

The owner of the Mahogany Heights Carnival Band said that Jasmine was a sweet girl and loved to sing and entertain.

Police have begun an investigation into the murder.