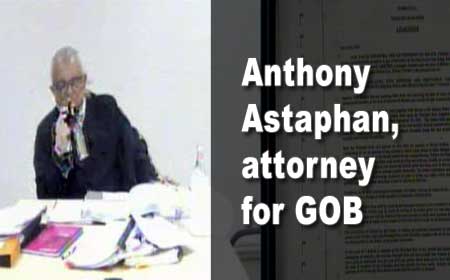 BELIZE CITY, Tues. Oct. 17, 2017–The Belize Bank is seeking permission from the Caribbean Court of Justice (CCJ), the highest appellate court for Belize, to proceed with its case against the Government of Belize, which is now being required to pay an estimated $70 million and counting to settle a debt guarantee with penalties and interest for Universal Health Services, which has been transformed into Belize Healthcare Partners Limited.

Appearing before the Caribbean Court of Justice today, Senior Counsel Eamon Courtenay, appearing for the Belize Bank with Angeline Welsh, told the justices of the court that the Government is obliged to pay.

He refuted the Government’s position that the debt arrangements and the agreement with the bank to pay the private hospital’s liability are in fact unconstitutional, especially since the approval required by Parliament had not been sought or granted.

Courtenay argued that “…as we speak, contracts are being signed every day by the Government committing to pay for delivery of works and services without prior financial approval.”

The government holds that enforcing the arbitral award handed down by the London Court of International Arbitration (LCIA) in 2013 would be contrary to public policy. Courtenay told the CCJ today that before a court can find that it is contrary to public policy to enforce an award, it is necessary for the Government to specifically identify a provision of the Constitution or some very important provision of statute or some other evidence of illegality to support its claim.

“If the government wishes to act lawfully – in a way not contrary to public policy – every agreement and every contract that will require at some point expenditure of public funds must go for parliamentary approval prior…” he contended.

He agreed that the control of public expenditure rests with Parliament and the executive arm of the Government is obliged to respect it, so they must seek permission to make payments. He said that as a general principle, he has no difficulty with the executive conducting its business and subsequently getting its approval, as in the case of supplementary expenditures.

“What is the illegality that you are talking about? In this particular case, your honors, what is it that the government is saying?” he questioned.

Courtenay told the CCJ that, “There is nothing wrong with the loan note… as no prior approval is required.”

He contended that the Government of Belize should have obeyed the award because they had agreed to pay.

“If this court grants this order, we will make a demand,” he said.

If the government doesn’t pay, he said, there is a procedure laid out in law as to what is to happen but hopefully they don’t need to get there, he told the court.

Attorney for the Government of Belize, Anthony Astaphan, who appeared with Solicitor General Nigel Hawke and counsel Agassi Finnegan, said that while the then government (led by the People’s United Party administration of Prime Minister Said Musa) had agreed to pay the debt, the agreement attempted to impose unconditional obligations on the government to pay a specific amount on demand under loan note and no later than September 2007.

Astaphan argued that this “…trespasses into the exclusive jurisdiction of Parliament under the Constitution and the separation of powers.”

He said that under the disputed agreement, the obligation which was being taken on by the government to pay was unconditional and not subject to any attempt to get Parliament to pay the debt which the Government had agreed to pay with the loan note. The agreement, by fixing not the amount but the date by which the debt was to have been paid—with consequences such as interest and cost—shows that there was really no intention whatsoever to seek the permission of the Parliament, Astaphan argued.

He told the court that the question is, what is the constitutional position when it comes to the authority of the executive?

Asked by the CCJ whether he agrees that the Government needs to go to Parliament for approval, Courtenay said, “yes!”

He said that it starts from the premise that there is collective responsibility and once the executive has taken a decision, it has an obligation so that when the time arrives for it to perform, in terms of payment, that it will go the National Assembly and ensure that the monies are paid.

Courtenay said that if the Government of Belize seeks protection under the Crown Proceedings Act and does not honor the court order, which he hopes the bank will get from the CCJ, it would be deemed unconstitutional. He argued that the law only grants limited immunity for the executive against assets, and “it is not a ‘get out of jail free card’ for the government to say it will not pay and they can’t do anything.”

The filing by the Belize Bank is the first case listed on the CCJ’s 2017-2018 calendar year.

The court has yet to pronounce on whether it will agree for the matter to proceed to hearing.