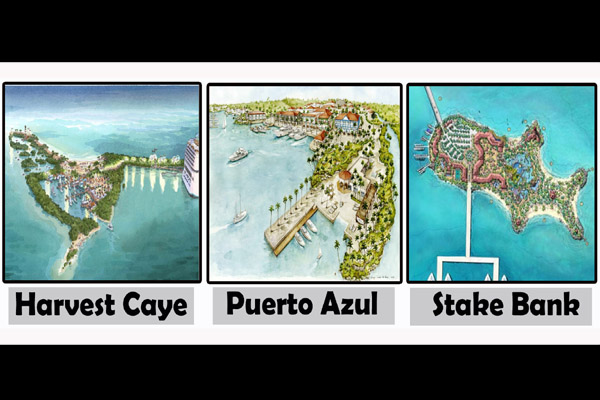 BNE and Ara Macao proposals up for scrutiny

Cabinet’s Investment Subcommittee met Friday and affirmed its position on three multi-million-dollar tourism investment projects: Norwegian Cruise Line’s Harvest Caye development, Puerto Azul and Stake Bank, amid continuing controversy over whether at least two of these projects should be permitted to proceed as planned.

Chairman of the Investment Committee, Senator Godwin Hulse, Minister of Labour, Immigration, told Amandala subsequent to that meeting that the Norwegian project will proceed, unless there is an injunction from the court to stop it.

In the recent weeks, an alliance of both local and international conservation NGOs have called on the Government to put the brakes on Puerto Azul, a proposal for a mega resort facility within a few miles of the Great Blue Hole. Hulse said that the investors should be returning to the Government in 4 to 6 weeks’ time, when their studies are complete, so that the Government could determine whether the project meets the 5-point criteria which Cabinet has set to assess potential investment projects.

Hulse said that both Norwegian and Stake Bank have already passed that test, which formed the basis for Cabinet approval.

Meanwhile, the Supreme Court last week ruled that it would hear a challenge from the Belize Tourism Industry Association (BTIA) over alleged irregularities in the approval of the Environmental Impact Assessment for the Harvest Caye development in southern Belize. The BTIA did not ask the court for an injunction, and Norwegian’s attorney, Eamon Courtenay, SC, has said that BTIA isn’t serious about stopping the project.

While there is no legal dispute at this time over Puerto Azul, Government and the investors who have committed millions in a separate project for a cruise port and EPZ shopping zone a few miles off Belize City at Stake Bank and Drowned Cayes, are at loggerheads over indemnification provisions in their agreement.

Hulse told us that two new investments are up for scrutiny by the Cabinet subcommittee: a proposal from Belize Natural Energy for an LPG terminal in Belize, and another for an Ara Macao project marina.