When Government betrayal of youth in Belize creates Black On Black crime! 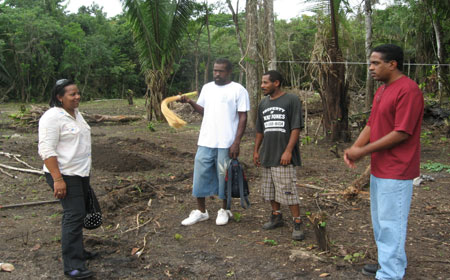 In the memory of Karim Yasin Hafiya (Keon Gentle)

The Barrow administration is squarely to be blamed for the carnage we see on the streets of Belize with this explosion of black on black crime. They have gone out all the way since their coming to power in 2008 to make sure that Belizeans in the diaspora, who returned to make a difference, were not afforded the opportunity to do so, especially the ones that had challenged them in the past since their coming to power in 1984 through the Esquivel administration.

There is a whole history of strained relations between this particular government in power today, and some Belizeans abroad who resisted the draconian policies in which they continue to use to govern Belize today. And the same thing can be said of that regime that is now called the Opposition.

It has got to be known that BREDAA’s chairman, Nuri Akbar Estrada, made a significant contribution in Belize in 2008 in lending his skills and expertise in youth development, whereby addressing the crisis of black Belizean youth disenfranchisement and marginalization when he worked in the Youth Cadet Core in Belize as an organizer for the program.

But he was rejected by the very Barrow administration in his attempt to do that work. It is very important to understand that the state of affairs that Estrada found the program in by the previous administration was terrible to say the least.

However, he was able to build back the program from bottom up, and change the whole culture in terms of how business was conducted by those who were calling themselves directors and experts in youth development in Belize.

But Estrada’s kind hand of gesture was knocked back very rudely by the same Barrow administration that appeared to have not wanted in any terms possible for Estrada to fix such a festering problem. Therefore, the brother’s work was hijacked, ambushed, and destroyed.

There are forces in Belize at the top who refuse to allow any change to come to the explosive crisis of black on black crime, and like they are very much saying: well, we can’t do anything to arrest the situation, so let the criminals take over.

And it appears that they will do every devilish thing to stop those who want to make a difference.

The photos in this expose, show BREDAA’s Nuri Akbar Estrada at the Youth Cadet Core on the George Price Highway in 2008 as he did his most constructive work ever to assist in addressing the crisis of youth delinquency in Belize, and to arrest the problem of gangs and black on black crime.

The crisis that is presently unfolding in Belize today in terms of the violent annihilation of the black Belizean youth is by design. It is orchestrated by those forces and people in Belize who are puppets of foreign transnational forces whose aim is to eliminate all resistance to land speculation, exploitation of Belize’s natural resources, and the control of Belize’s human potential and resources which is its youth.

And so today we see the Belize youth in this critical state of affairs where they are self-destructing because they feel that there is no more hope for them to get a job and to be accepted by the status quo that see them as those “black Belizean boys.” The photos also seen in this expose show some of those young black Belizean youths who were fortunate to have had Brother Nuri Akbar Estrada change their lives before government came and destroyed the program that was built for them to be rehabilitated into productive young men rather than becoming these so-called menaces to Belizean society.

The betrayal of the black Belizean youth in particular, and Belizean young people of all cultures in general by Belizean governments both past and present has got to be stated as the root cause of why Belize’s crime problem has risen to such alarming proportions, and as to why Belizean black males are violently annihilating themselves. It appears that these politicians and stakeholders in the system of life we call Belize do not want to see change since crime is an economic indicator for lawyers and the courts who prosper off this destruction.

Belizean society today has refused, rejected, and eliminated even their own people from making significant contributions to the state of emergency that we see unfolding in Belize today with its youth. Particularly, they have openly and without any apology rejected Belizean diaspora assistance in the development of Belize. How long will they be able to do that is left to be seen, but the times are getting desperate and there will come a time when Belizean society will beg its diaspora for help. It’s just a matter of time.

In this expose, the BREDAA chairman, Brother Nuri Akbar Estrada, is seen working with his colleagues in the Youth Cadet Core in 2008 on an agricultural program in the village of Tea Kettle. It is a program that has also brought about some serious nightmares and destruction at the Belize Cadet Core after Estrada’s departure. This expose, through the story of BREDAA’s Nuri Akbar Estrada and his standing up for Belize’s youth to make a difference, shows how the present Belize government has failed and betrayed its Belizean young people today.