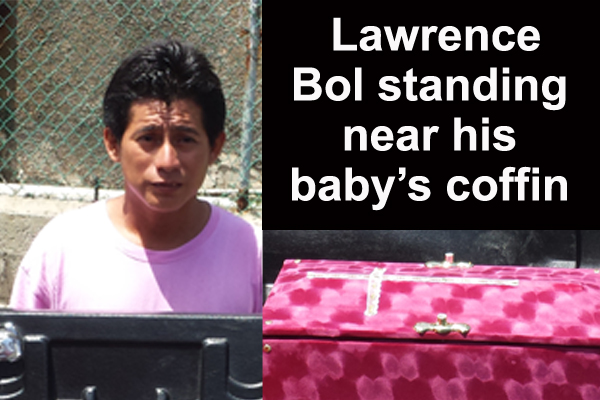 Grieving parents Lawrence Bol, 31, and Elvira Ack, 30, took the body of their firstborn child back home to Toledo today, Friday, for burial.

The couple lost their baby girl on July 14, 2013, just two days after Ack gave birth to the premature baby at the Karl Heusner Memorial Hospital (KHMH). Ack said that she was told her baby was doing well but the child was still taken to the intensive care unit. Despite the fact that she was reassured that the child was well, and although she saw encouraging progress in the baby’s condition, however, she was informed early in the morning on July 12 that the child had died.

At first, the couple were not given any explanation as to why their baby died. They were only told that the baby had stopped breathing and they would have to wait until a post-mortem was conducted to confirm the cause of death.

Both Bol and Ack made public how they felt about what transpired and said that they wanted some form of justice for their child because they do not understand how their healthy child could have suddenly died.

With the death of 13 babies in the intensive care unit at the KHMH fresh in their memory, the family was very concerned that their baby was possibly another victim of the enterobacter cloacae infection. Amandala spoke to Bol on July 17 and he told us that the post-mortem results indicated that the baby did not die of the bacterial infection, but of complications related to heart failure.

The family is in need of financial assistance to cover medical expenses that accumulated while Ack and her baby were in the hospital and is requesting aid from the public. Anyone who is interested in helping the family can contact either Bol or Ack at cell phone number 626-0806.