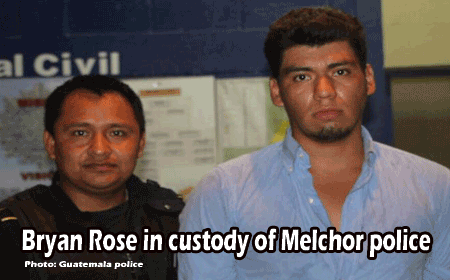 BENQUE VIEJO DEL CARMEN, Cayo District, Thurs. May 26, 2016–Esdras Chaneck, 21, a taxi driver of Benque Viejo Del Carmen, was held up and robbed by two bandits, believed to be Guatemalans, at about 1:30 yesterday afternoon in Calla Creek, Cayo District.

The thieves robbed Chaneck of his wallet, which contained $200, his Social Security card, his driver’s license, his S4 Digicell phone with chip # 626-6977, and a memory chip valued at $700. The car the bandits stole is a Toyota Corolla valued at $10,000.

Benque Viejo police were quickly alerted, and they notified their counterparts in Guatemala, the Melchor De Mencos police, who began an investigation and looked for the stolen vehicle in that town.

At about 10:00 this morning, a little less than 24 hours after the car was stolen, Melchor police reported to Benque police that the taxi that had been stolen in Benque Viejo had been found in Melchor, and Guatemalan Bryan Gabriel Hoil Rose, 19, of Suchitán, Melchor, was found driving the stolen car.

Inspector Stanley Bodden, Deputy Commander of Benque Viejo police, told Amandala that the car will be returned to Belize, but there is a process that must be carried out. Also, although the stolen vehicle was found with the alleged thief in Melchor, he cannot be tried in Guatemala for stealing the vehicle, because the crime was not committed in that country.

If and when he should return to Belize, however, he can then be apprehended and charged for robbery.

Bodden said that they can now only wait for the vehicle to be handed over to them by the Melchor police, after which it will be returned to the owner.

Esdras Chaneck told Benque Police that about 2:30 yesterday afternoon he was working in his cab, a 1999 Toyota Corolla taxi with L/P BVO D-00744, in Benque Viejo. Upon arriving by Latin Belize, situated on the George Price Boulevard, he picked up two men of Hispanic descent, between the ages of 19 and 25 years. They asked him to drop them off in San Ignacio Town, he said.

Chaneck said that, before arriving in San Ignacio, while driving through San Jose Succotz, he picked up a woman who asked to be taken to San Ignacio Town also. She sat to the far right of the back of the vehicle, with the two men to her left, and he continued the drive to San Ignacio.

Chaneck added that on his arrival in front of the first roundabout in San Ignacio Town, by Uno Gas Station, he picked up his friend, Richard Ponce, who wanted a ride to Benque Viejo Town. He then dropped off the woman by the Welcome Center in San Ignacio, and that was when the men asked to be taken to Bullet Tree.

Chaneck then drove to Bullet Tree, but en route, after turning into Calla Creek Road, one of the men, seated behind him, ordered him to stop the vehicle. The two bandits then attacked Chaneck and Ponce from behind and put knives to their necks.

The two assailants then robbed them of money and cellphones. From Ponce they stole a red Metro PCS smart phone with calling # 650-5647, valued at $110, and his wallet, which contained $70 in cash, his Social Security card and voter’s ID.

The two bandits allowed Chaneck and Ponce to come out of the vehicle unharmed, and the bandits escaped, driving off with the cab into Guatemalan territory through Bullet Tree, a village bordering Guatemala.