Guatemalans stirring waters of the Sarstoon 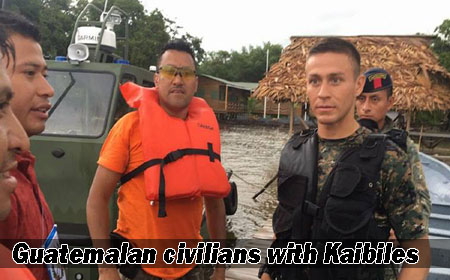 SARSTOON RIVER, Toledo District, Mon. July 11, 2016–Even as Belizean and Guatemalan officials have publicly committed to working out a mechanism of cooperation on the Sarstoon, to diffuse tensions at Belize’s southern border with Guatemala, reports have beeen made of increased presence by Guatemalan civilians in the area this past weekend.

On Saturday, July 9, 2016, a group of persons who posted on the “Belice es de Guatemala” Facebook page, published videos of their 7-member expedition to the Sarstoon River—an expedition which they say is a start of a nationalistic movement to reclaim Belize.

This evening, the Facebook page of “Kaibiles Fuerza elite ejercito de Guatemala y soldados regulares” shared 6 photos of group members with the Kaibiles. The group said that this Saturday, they were in the “adjacency zone” (the phrase the Guatemalans use because they do not want to acknowledge our borders). They said that they thought they would have had the support of those who are always talking but only 7 showed up. The group contends that they have taken the first step in starting the real fight. They signed the Facebook note “kaibil”—the name of Guatemala’s elite military, suggesting that the group may have some military ties.

The group—whose aim seems to be to rival the work of the Belize Territorial Volunteers in expressing Belize’s sovereignty over the portion north of the mid-channel of the river—flew banners with Belize included in Guatemala’s territory, and with the Guatemalan flag superimposed over Belize and the quetzal, their national bird, flying over Belize. The group claims that they did not make it to Sarstoon Island because of time constraints and rainy weather.

Meanwhile, Wil Maheia, founder of the Belize Territorial Volunteers, visited the area on Sunday. Maheia told us that he left Punta Gorda at about 8:00 a.m. and went towards the mouth of the Sarstoon. He said that there were at least 20 Guatemalans fishing in Belizean territorial waters using gill nets. They were a few yards away from the bank on the Belize side and less than a mile from Belize’s Forward Operating Base, Maheia said.

He said that over the years, the mesh size of the gill nets which the Guatemalans use have become smaller and smaller—an indication, perhaps, that it is getting harder to catch fish in the area due to dwindling resources.