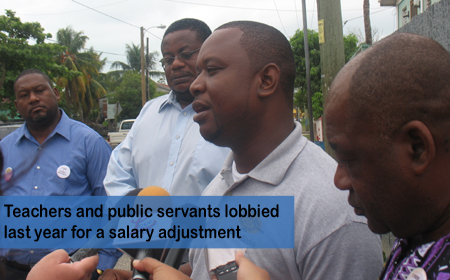 BELMOPAN, Thurs. Mar. 5, 2015–A communiqué issued by the National Assembly this week confirms that the House of Representatives will meet next Friday, March 13, 2015.

Amandala has confirmed from Prime Minister and Minister of Finance Dean Barrow that the meeting has been called to introduce the 2015 national budget.

Barrow told us that Cabinet won’t get to approve the budget until next Tuesday, and then the Ministry of Finance would have to do some quick adjustments, if necessary.

Barrow said that the “bright spot” in the budget will be the inclusion of a second salary adjustment for teachers and public officers, following the first adjustment that was awarded last year, 2014.

He said that there will continue to be pressure exerted on the Government because of the deficit, due to major spending under capital II and capital III, which he said will go significantly over budget, but which, he said, they will “live with”, given the amount of spending on the ground.

In a recent report on Belize, Moody’s Investment Service pointed to a high wage bill and higher public spending on road infrastructure, which, Moody’s said, is likely to lead to the first budget deficit for the Government since 2006. It also said that a cutback on Belize’s production and sale of crude oil could lead to substantial risks for bondholders who subscribed to the restructured Super-bond in 2013.

Barrow told us that he does not pay too much attention to such reports, and “nobody in terms of domestic electorate pays any attention to them at all…”

On another note, whereas Cabinet is slated to meet to discuss the budget next week, the Prime Minister told us that they would wait until after the budget is introduced in Parliament to look at the Marijuana Decriminalization Report which was launched last Friday in Belize City.