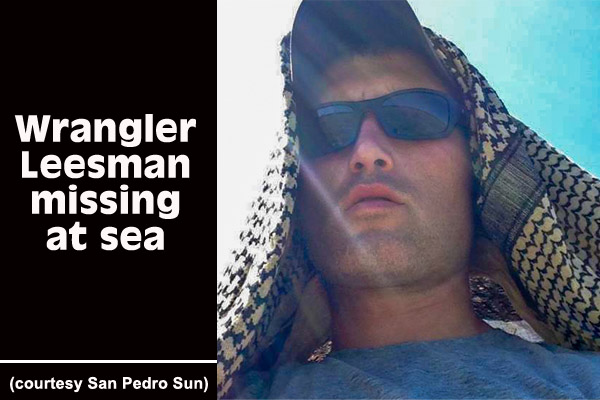 The National Coast Guard, along with the San Pedro police, concerned fishermen of San Pedro and the BDF Air Wing, are presently conducting a search-and-rescue operation in the area of Northern San Pedro, which has been extended to Turneffe and the surrounding area to find Wrangler Shane Leesman, 29, an American soldier who went under water and failed to resurface after the kayak in which he and his friend were riding overturned while they were kayaking in the Northern San Pedro area at about 11:30 Tuesday morning.

Six days after he was submerged in the water, Leesman has not been found.

Bradley Evans Josker, 24, also an American soldier, who was along with Leesman in the canoe, was rescued by the Coast Guard at about 5:30 that same Tuesday evening, 6 hours after they overturned in the sea.

Police reported that at about 11:30 Tuesday morning, Josker and Leesman went on a kayak ride to the reef.

Josker told police that as they neared the reef, they noticed the water was getting rough and decided to turn back, but a wave slammed them, causing their kayak to overturn. Josker reported that they tried to get back to the kayak, but were unsuccessful, but while doing so, another wave slammed them again, causing them to go under water once more, and that was the last time he saw Leesman.

Josker said that he tried to swim towards shore, but the strong current pulled him over the reef, where he employed water survival skills and floated until he was rescued by the Coast Guard later that evening.

After rescuing Josker, the Coastguard began a search for Leesman, but the effort was in vain.

In an interview, Commander Greg Soberanis of the Coast Guard told the media that a woman in the area of Northern Ambergris Caye saw an overturned kayak floating in the sea, and no one was around, and requested the Coastguard to investigate the situation.

The Commander said that they deployed a boat from San Pedro to the area, and began a search, which led to Josker being found. When he was found, Josker was exhausted, and collapsed in the boat.

The Coast Guard reported that the waves outside the reef were extremely high, which made the search operation difficult. A Defender Aircraft from the BDF Air Wing is assisting the operation.

Shane Leesman is described as being a Caucasian, about 5 feet 8 inches tall, and weighs about 170 pounds. He has a sleeve tattoo on his arm and was last seen wearing only a pair of white swim shorts.

Josker and Leesman should have returned to the United States yesterday, Thursday, May 1.

According to 7News, the men went kayaking without life jackets, and they had been strongly advised not to go out to sea by the security guard at their resort because the condition of the sea was too rough.