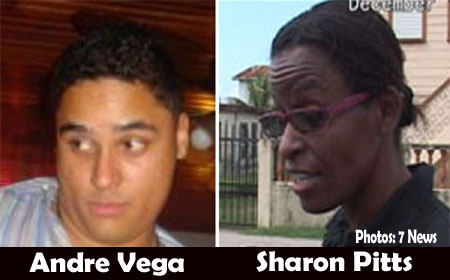 BELIZE CITY, Mon. Oct. 17, 2016–Two persons highly connected with the ruling United Democratic Party (UDP) walked away with a total of almost a million dollars from the Lands Department in the wake of a shady land transaction scheme.

Both individuals were the recipients from the ruling administration of privately-owned land at Mile 5 on the Northern Highway, in Belize City. Despite evidence presented to government officials at the Ministry of Lands that the land was already owned, Lands officials vacated the original title and parceled the land between Pitts and Deputy Prime Minister Gaspar Vega’s campaign manager, Hilmar Alamilla.

Alamilla rather quickly sold his land to Andre Vega, son of former DPM Gaspar Vega, for $15,000. In both cases, the Government then had to re-acquire these privately owned plots of land from the two individuals at a hefty price of $400,000 each.

The Vega and Pitts scandal is only the latest in a long list of corruption scandals under Prime Minister Barrow’s stewardship.

In a press conference held today, Monday, at the Best Western Belize Biltmore Plaza, Attorney General, Vanessa Retreage, outlined a detailed report on how both persons were paid $400,000 each by Government.

On June 8, 1988, Carlton Russell had legitimately sold 2.2 acres of land situated near the mouth of the Belize River, 5 to 6 miles from Belize City, to Miguel Valencia for $50,000.

On October 2011, an unnamed person at the Lands Department provided the then Lands Commissioner with information suggesting that the land had been owned by someone, as it had been previously been surveyed and was recorded in the survey register.

According to Retreage, she noted that instructions were given by the Lands Commissioner to the National Estate Officer to revoke the permission to survey which had been previously approved for Pitts.

A letter dated November 3, 2011, was recovered by Retreage in which Pitts was informed that the permission to survey was revoked, because the land, “is not available.”

However, despite that letter, a survey plan done by Pitts was examined, approved and authenticated by the Lands Department on November 8 2011, and recorded in the survey register.
A note was left in the Pitts file which read that her survey, dated October 20, 2011, superseded a previous entry, presumably that of the real owner of the land.

There was no record of who approved that entry into the survey register, Retreage said.

On November 25, 2011, a letter from the Land Commissioner indicated concerns about the availability of the land Pitts had surveyed.

However, persons in the mapping department of the Lands Department indicated that the land was national land.

By November 30, 2011, the then Minister of Natural Resources, Gaspar Vega, approved the sale of the land in question to Pitts at a purchase price of $10,569.

According to Retreage, the Commissioner did not provide any written report or recommendations on the sale of this land to the Minister.

Pitts proceeded with the sale and by September 24, 2012, she owned the land legally belonging to Valencia.

In the report now in Retreage’s custody, there is a loss of minutes (minutes are written records on the inside cover of the file that document additions to the file as well as instructions from the various officers who use the file) from the file from minute 7 to 25, on this transaction.

Nevertheless, it was revealed that on October 22, 2014, a revocation of land from Sharon Pitts and Hilmar Alamilla was instructed.

On December 9, 2014, legal counsel in the Lands Department advised that an investigation be launched to confirm that the land held by the duo was the same land which had belonged to Valencia.

On December 15, 2014, the then acting principal surveyor issued a memo confirming that Valencia was the original and legal owner of the land in question.

By January 26, 2015, letters were sent to both surveyors who surveyed lands for Alamilla and Pitts, informing them that the surveys conducted by them had been cancelled.

Based on an evaluation on the value of the land done by Herman Castillo, Chief Value Auditor, the compensation was stated to be $400,000 for Pitts, plus .63 acres of land.

What is noteworthy is that the valuation report done by Mr. Castillo, used as a basis for payment to Ms. Pitts, dated in 2013, was $1.7 million dollars.

Heimer Alamilla received permission to survey 1.124 acres of land along the Philip Goldson Highway on January 17, 2012.

However, there was no evidence on file confirming that prior to receiving the application to survey, Alamilla had applied for a lease.

Nevertheless, on November 28, 2011, a survey plan done on his behalf was examined, approved and authenticated on December 6, 2012.

By this time, the original survey plan of Carlton Russell had been cancelled by the authentication of the Pitts survey.

On December 12, 2012, almost 12 months after he received permission to survey the land, Alamilla applied to lease the land.
Though that application was dated January 10, 2012, it was not lodged until December 12, 2012.

On January 29, 2013, a revised purchase approval was sent to Alamilla with the new purchase price underscored.

On July 27, 2015, a letter was sent from the Commission of Lands indicating that there was duplication to Vega’s land ownership.

However, reports reveal that the Commissioner of Lands expressed that the young Vega was willing to surrender the land to government for $400,000.

Senator Minister Vanessa Retreage, at the press conference today, announced that these files were processed in error and furthermore, that steps would be taken to recover monies which were discovered to be wrongfully paid out.

Further compensation for other irregularities in land transactions are now on hold by the Ministry until further notice.