Luis Sierra, 46, lured to his death in Valley Community 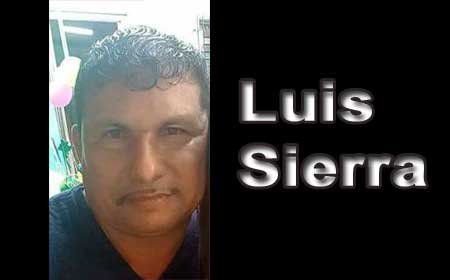 HUMMINGBIRD VALLEY COMMUNITY, Stann Creek District, Sat. Sept. 30, 2017–On Thursday afternoon, at about 2:30, Luis Sierra, 46, a butcher and businessman of Bullet Tree Falls, Cayo, was ambushed and shot at a farm in Valley Community, Stann Creek District, where he and a friend had gone to inspect some cattle.

Sierra used his cell phone to call his family and friends, telling them that he had been shot and that he was dying. They immediately alerted Dangriga police, who went to the area to look for him.

Ramon Teck, 30, of Bullet Tree, who was with Sierra, told police that after shooting Sierra, his killer, who had been hiding in some bushes, chased him, Teck, and tried to shoot him, but the gun snapped. After the gun failed to fire, the bandit, who was unknown to them, escaped into the bushes.

Teck said he then left the area to seek help, and to alert police. When the police reached the area at about 4:30 that evening, he went with them to find Sierra.

The search party brought the search to a halt after it became too dark to continue.

On Friday morning, at about 9:00, another search party, which included police and Sierra’s family and friends, resumed looking for him, and at about 11:30 in the morning, about 200 meters away from the farmhouse on the property which they had visited on a quest to buy cattle he was found. Unfortunately, he was already dead.

Sierra had reportedly gone to the farm of Lyndon Lewis, 31, of Mile 18 on the Hummingbird Highway, Valley Community, to buy cows at a very reasonable price. His brother said he became suspicious that the cattle may have been stolen, and warned him not to go.

Teck told police that on Thursday evening, when they arrived at the farm, which is about 400 meters from the highway, they were taken to the farm owner’s house. After they spoke with him a while, the farm owner took them to his pasture see the animals. He said that when they got there, they saw no animals – only high bushes.

During their walk back to the house, the farm owner walked at a distance behind them, said Teck.

It was during that walk back that the killer came out of some bushes, where, apparently, he had been hiding, and pointed a gun at them. He fired, and Sierra was hit in the stomach.

Sierra’s relatives and police strongly believe that the promise of sale of cows at a very reasonable price was concocted to get Sierra to the farm to ambush and rob him.

Police investigations into Sierra’s murder led to the arrest of the farm owner, Lyndon Lewis, and a Valley Community resident, Saul Campos, 34. Lewis was charged with “conspiracy to robbery”, and Campos was charged with “murder” for the death of Luis Antonio Sierra.

Campos was also charged for “kept unlicensed firearm and ammunition”.

The two will be arraigned at the Dangriga Magistrate’s Court and will be remanded to the Belize Central Prison, where they will await trial at the Supreme Court.

Superintendent Luis Wade, Commander of Dangriga Police, said that while searching the area for Sierra, they found a .38 Special revolver. The gun was loaded, except for one expended case. The gun was handed over to the Scene of Crimes police for analysis.