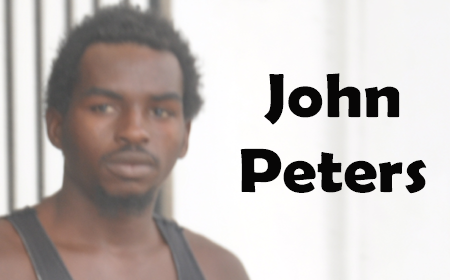 BELIZE CITY, Mon. Mar. 2, 2015–A Belize City man, who did not know the penalty for drug trafficking, found out the hard way, after he pleaded guilty to the offense when he was arraigned in the Magistrate’s Court of Senior Magistrate Sharon Frazer this morning.

After Frazer read the charge of possession of 484 grams with intent to supply to another for the purpose of drug trafficking to him and asked him what was his plea, John Peters, 20, a resident of 63 Central American Boulevard, replied, “Guilty.”

Frazer asked him if he knew what he was pleading guilty to.

Peters replied, “No, ma’am, but dem ketch me with it.”

Frazer proceeded to read the police facts of the charge. On Sunday, March 1, 2015, police were on mobile patrol when their attention was drawn to a man who was riding a red beach cruiser bicycle on the footpath of Crawford Street, in the Jane Usher Boulevard area.

Police ordered the man to stop riding on the footpath, but he did not, so police began to chase him.

During the chase, police observed that the man dropped a red knapsack as he attempted to escape.

Eventually, police caught up with him and they took him back to the spot where he had dropped the red knapsack.

When the knapsack was opened, it contained suspected cannabis. Peters was arrested and taken to the Precinct 2 police station, where the suspected cannabis was weighed in his presence and amounted to 484 grams.

“I just freeze and told them that da fu me,” Peters told the court.

It turned out that Peters had two previous court fines that he had failed to pay. He had been ordered to pay $205 by March 7, 2014, for a harm conviction. He also owed the court another $205 for a wounding, conviction. Failure to pay the two fines carried a six-month prison term — three months for each unpaid fine.

Frazer explained to him that the penalty for drug trafficking is a fine and confinement. She sentenced him to the minimum penalty: three years in prison and the mandatory minimum fine of $10,000.

Peters, still unfamiliar with the process, asked the Magistrate what the $10,000 was for.

Frazer told him that it is a fine and he has to pay it by May 30; if he does not pay, he will have to spend an additional three years behind bars.