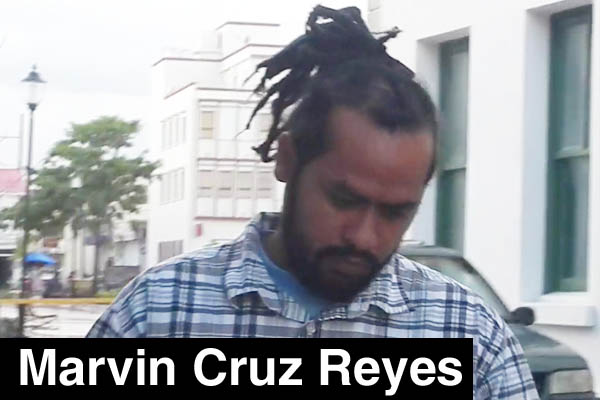 Reyes was found guilty of the attempted murder of Kareem Wright, 30; Wright is now paralyzed

Tonight, Marvin Cruz Reyes, 28, is at the Belize Central Prison after he was found guilty of the attempted murder of Kareem Wright, 30.

This was a retrial for Reyes because the first trial in July of 2009 ended with a hung jury.

Wright, who was left paralyzed from the waist down, had to be brought to court by a BERT ambulance because that is the only means of transportation by which he can travel.

He was the first witness to be called in the trial, which started last Wednesday, and he testified that at 5:00 on the morning of August 26, 2007, he and his girlfriend were walking on Ebony Street. When they got to the corner of Ebony and Sarstoon Streets, he heard someone call out to him, and turned to see Reyes, who was the ex-boyfriend of his girlfriend, he said.

He didn’t go to Reyes, but later, shots rang out, and he and his girlfriend started to run in different directions. As he was running away, he heard his girlfriend scream, and when he turned around to see what had happened to her, he was shot in the neck and fell to the ground.

The Crown, represented by attorneys Leeroy Banner and Javier Chan, then closed their case and when it came time for Reyes to present his defense, he chose to remain silent.

The jury deliberated for just under four hours and returned with a unanimous verdict of guilty. When asked if he wanted any time to prepare a mitigation plea or to have anyone come to speak on his behalf, Reyes told the court that he chose to say nothing, and with that, Justice John “Troadio” Gonzalez then sentenced him to 15 years in prison.

But before sentencing Reyes, Justice Gonzalez told him, “You had nothing to say, not even that you were sorry for what you have done. You tried to kill Kareem Wright, and left him a vegetable. It is difficult to temper justice with mercy for you, so I have no choice but to imprison you for 15 years”.