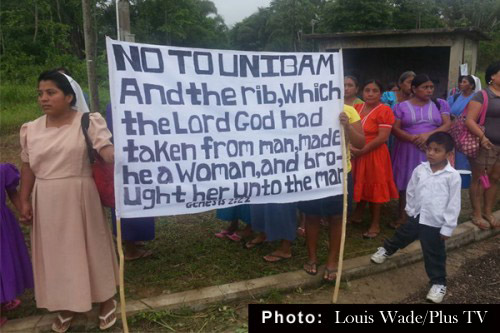 In an unprecedented march held in Toledo on Friday, July 5, thousands marched in the scorching heat to send a strong signal to Belizean authorities that “righteousness exalts a nation,” and that the Belize Constitution, which speaks multiple times about “public morality” and the Supremacy of The Creator, should be defended.

Whereas organizers are shying away from making explicit statements against the mainstreaming of a worldwide LGBTTTI—lesbian, gay, bisexual, transvestite, transsexual, transgender and intersex—agenda here in Belize, it is clear that protestors are addressing just that.

The organizers have repeatedly asked protestors to refrain from addressing or attacking the United Belize Advocacy Movement – UNIBAM – the group that is challenging the constitutionality of Belize’s sodomy laws; yet, a prominent placard screamed: “No to UNIBAM,” and quoted Genesis 2:22, which says: “And the rib, which YAHUAH Elohim had taken from man, made he a woman, and brought her unto the man.”

Demonstrators also held placards that said “No” to the new gender policy. The Revised Gender Policy 2013 has been causing waves of controversy because the text of the document purports to change the definition of gender and to build a framework for the defense of rights for the LGBT community—which some argue will include gay marriage.

An estimated 4,000 protestors attended Friday’s demonstration, and most of them proceeded from Silver Creek, Toledo, to the Christian Radio station, six miles away on the PG San Antonio Road.

“Unlike a political rally, there were no free food or beer or free anything out there and this is probably the biggest gathering of people ever in Toledo,” said Wil Maheia, Punta Gorda nationalist and owner of PGTV. He said that he counted over 40 buses at the event.

The Toledo march is one in a series of five such marches—being dubbed Constitution marches—which are being organized by religious activists.

The first march was held in Orange Walk three days prior, and the next march comes today, Tuesday, July 9, in San Ignacio Town.

A march is planned for Dangriga on Saturday and the group makes its final statement in the Old Capital next Tuesday, July 16.

After a turnout of 300-plus in Orange Walk on a rainy Tuesday for the Constitution March, there were over 4,000 in Punta Gorda (42 buses, hired by the alcaldes of the villages) and 400 people were left behind, organizers said.

“This is not an ‘ANTI’ march, it is a PRO Constitutional Values march!” organizers of the Toledo march said, calling it a “Constitution March for Righteousness.”

Placards had phrases like: “A Nation in Distress,” and “No to Gender Policy.” They also quoted Scripture, such as 1 Corinthians 6:10, which says the wicked will not inherit the Kingdom — “…neither fornicators, nor idolaters, nor adulterers, nor homosexuals…”, and added that because of sexual immorality “each man should have his own wife, and each woman her own husband.”

The group also asserts that the Belize Constitution states clearly that the Nation of Belize shall be founded upon principles which acknowledge the supremacy of The Creator.

It also states that “men and institutions remain free only when freedom is founded upon respect for moral and spiritual values.”

The Constitution refers repeatedly to the term “public morality,” the pastors say, expressing their belief that the church “…is the primary caretaker of that public morality.”

Organizers urge those who want to participate to bring placards with positive messages, trumpeting such things as “inalienable rights endowed to us by our Creator!”

“We want it to be POSITIVE and PROACTIVE, celebrating what our Constitution enshrines, not negative or bashing any groups, etc.,” organizers added.

(Amandala thanks Wil Maheia and PGTV for assisting us with this report.)