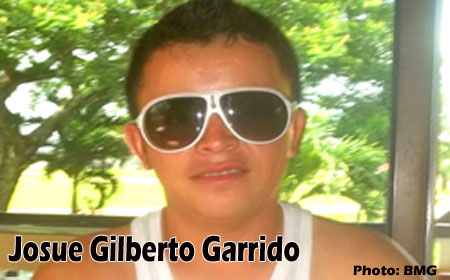 SPANISH LOOKOUT, Thurs. Feb. 5, 2015–A collision involving a motorcycle and a 10-wheeler trailer truck that occurred near Spanish Lookout, Cayo District, sometime before 4:00 p.m. yesterday, Wednesday, has resulted in the death of a villager from that area.

According to police, a white Ford 8000 10-wheeler trailer truck that was carrying animal feed from Spanish Lookout was traveling on Route 40 in the Spanish Lookout area when, upon reaching the top of a hill, it collided with a black 125 cc Meilun motorcycle which was being driven by Josue Gilberto Garrido, 19, a laborer of Duck Run II Village, Cayo District.

Officer Commanding San Ignacio Police, Superintendent Dinsdale Thompson, told Amandala today that their preliminary investigations have revealed that the truck – which was being driven by Vladimir Cano – and the motorcycle were going in opposite directions when the incident happened.

He said that Garrido had apparently lost control of his motorcycle due to the gravel on the pavement, and had swerved onto the middle of the road and into the path of the oncoming truck upon reaching in front of Country Meats Farm.

Indications are that the driver of the truck swerved to avoid hitting the motorist, but Garrido still crashed into the left side of the truck.

Garrido suffered massive head and body injuries and died at the scene.

Police said that skid marks on the road indicated that the truck driver had applied brakes, which caused the truck to flip onto the driver’s side after the collision.

Cano reportedly complained of pain to his body and was taken to the Western Regional Hospital, where he is currently receiving medical treatment.

Garrido’s body was transported to the San Ignacio Town Hospital Morgue, where it is scheduled to undergo a post-mortem exam today.

Superintendent Thompson noted that police are presently continuing their investigations into the incident; however, Cano has nevertheless been served with a Notice of Intended Prosecution (NIP).