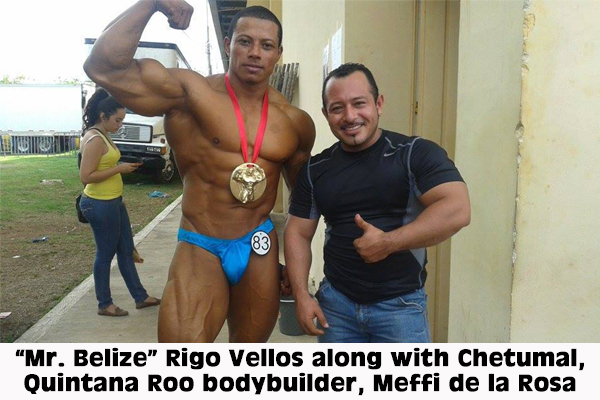 Belize’s top bodybuilder, who trains at Spartan Fitness Gym in Corozal Town, competed in the “80kg and over” category, defeating dozens of other international competitors.

He then advanced to the overall category and defeated well-known Mexican bodybuilders such as Surizaday Alba Peña of Mexico’s “The Gym” and Isaac Acuña of “AM Gym.”

This is a historic achievement for Belize. This was the first time a Belizean competed in the event. And now, a Belizean can claim the top title in one of Mexico’s most competitive bodybuilding competitions.

Rigo Vellos won the Mr. Belize title back-to-back at the Belize Body Building and Fitness Federation competition a few weeks ago on November 1.

(Ed. Note, Wed. Nov. 27: Big congrats from the sports desk! Rigo told us by phone this afternoon that the victory only serves to motivate him further to keep striving for greater achievement in the sport of bodybuilding. He said this was his 6th competition for this year, and he doesn’t expect to participate in any more competitions until next year. He has been invited, of course, to defend his crown in the 2014 Revolution Cup Bodybuilding Competition in Merida.)