Murder at the Michael Finnegan Market 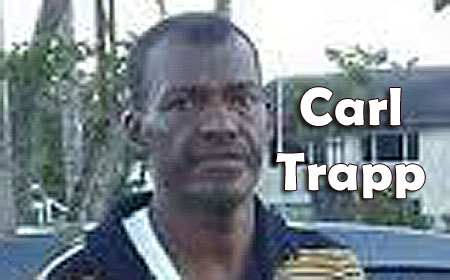 BELIZE CITY, Sat. Aug. 6, 2016–At about 6:00 Saturday morning, less than 48 hours after Hurricane Earl devastated Belize City, the lifeless body of Carl Trapp, 51, a worker who was sometimes the watchman for the Hyde’s Supermarket at the Michael Finnegan Market, was found on the walkway of the building.

Trapp, a resident of Camalote in the Cayo District, was seen with multiple stab wounds in the left side of his chest, on the side of his face and below his ear. He was lying in pools of his blood.

Trapp was taken to the Karl Heusner Memorial Hospital, where he was declared dead on arrival.

Alvin Hyde, Jr., the owner of Astar Hyde Supermarket, spoke to Amandala on Saturday morning at his businessplace shortly after the body was found.   Hyde said that Carl Trapp was his cousin and they were great friends. Trapp, Hyde said, lived in the building and helped him secure the building at night.

Trapp then got on his bicycle and rode off, but did not tell him where he was going.

Hyde said that he had been sweeping out water and cleaning up the building after the hurricane and that he was tired and went to bed. He did not wake up until Saturday morning when he was alerted that there was a dead man in the building.

Hyde said that Trapp and another woman who has a business in the building had keys to the building’s gates.

According to Hyde, Trapp usually locked the gates when he went out, or he would just hook it if he intended to return shortly.

Hyde said that Trapp did not tell him that he was being threatened.

Trapp had been serving a 5-year sentence for burglary, but had been released on a parole program about two months before and had been doing well in keeping with the requirements of his parole. Hyde said that the family knows of no reason why he should have been killed.

Hyde said that Trapp had served in the US Navy and had been living in the US for years before he came back home.

In surmising on why Trapp was murdered, Hyde said that he believes that Trapp may have gone to Princess Casino, where he won some money and that someone probably followed him to the market, where he was attacked and robbed.

However, police found $300 on Trapp, which a robber would have taken.

When the name Carl Trapp was submitted to the Belize Central Prison to be struck out of their system because of his death, the name was not found — only a Michael Trapp. An official from the prison was brought in to identify Trapp, and he was identified as Michael Trapp, but Michael Trapp was Carl’s nephew, Alvin Hyde said.

Hyde said that Carl Trapp had apparently been using his nephew’s name in the prison system. This just became known since the death, said Hyde.

Police have begun the investigation, but so far the motive for Trapp’s murder remains unknown.

Carl Trapp is survived by his parents, Reginald and Myrtle Trapp; his two sisters; five brothers; his cousin, Alvin Hyde, and a host of other family members and friends.