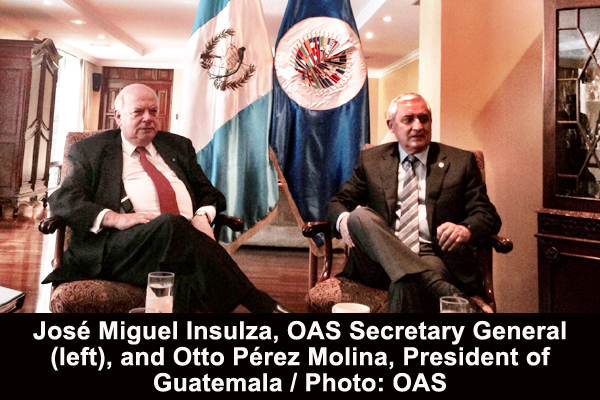 Guatemala is due to host the Special General Assembly of the Organization of American States (OAS) on September 19, 2014, and OAS Secretary General José Miguel Insulza arrived there on Friday, May 16, to discuss plans for that meeting.

On the occasion, Insulza also addressed the ongoing territorial differendum with Belize, as part of an agreement between Belize and Guatemala to hold national referenda so that their electorates could decide whether the dispute should be finally adjudicated at the International Court of Justice (ICJ).

Guatemala’s Foreign Minister Fernando Carrera was also present at the meeting, at which Guatemala media reports said the investigations into the March 2014 shooting death of Tomas Desdicho Ramirez, 26, who was said to be farming corn illegally inside the Chiquibul, were also discussed.

Belize’s Prime Minister, Dean Barrow, and Guatemala President Otto Pérez Molina, had issued a joint statement agreeing that the incident happened inside Belize, but the Guatemalans have questioned whether the Belizean military officer who shot Ramírez was “culpable” for the death.

An AFP news report said that Carrera had also confirmed that they had talked with the OAS about advancements made on the differendum between Belize and Guatemala.

Prensa Libre quotes Insulza as saying that much remains to be done, and so the parties continue to meet to reach an accord on a new date on which the simultaneous referenda could be held.

Insulza noted that Belize Foreign Affairs Minister Wilfred Elrington and Carrera had prepared an agenda which he hopes won’t be interrupted by “difficulties.” In January, Belize and Guatemala, under the auspices of the OAS, set out a new roadmap which the parties said would lead to the referendum, previously aborted by Guatemala.