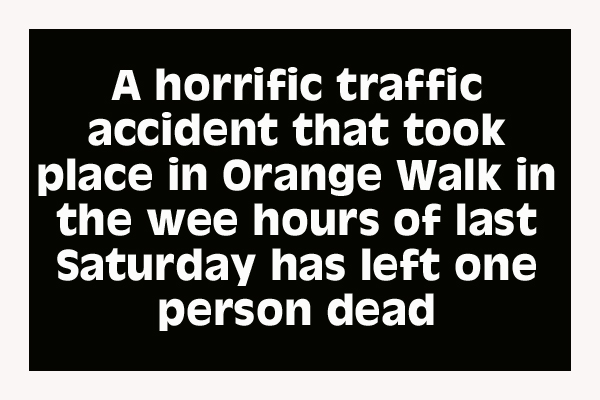 A horrific traffic accident that took place in Orange Walk in the wee hours of last Saturday has left one person dead, while another is facing charges for allegedly smashing into the victim, who was driving a motorcycle.

According to police, Rolando Silva, 44, a businessman of the Los Lagos community in the Belize District, was driving a white Toyota Tacoma pickup with license plates OW-C-18848 towards Orange Walk Town at about 12:55 a.m. on Saturday, July 5, when, upon reaching a curve near Mile 56 on the Philip Goldson Highway, he unwisely attempted to overtake another vehicle and slammed head-on into a red and grey Meilun Cyclone motorcycle, being driven at the time by Marvin Wilfredo Tillett, 32, of Trinidad, Orange Walk District.

When police responded, they observed Tillett’s body lying in the middle of the highway with what appeared to be two broken legs, an open wound in the center of the abdomen, and another open cut wound on his right leg, while his motorcycle, with license plates MC-2504, was completely wrecked, and the bumper of the pickup was completely broken off and its hood and front windshield smashed.

Today, Officer Commanding the Northern Region, Senior Superintendent Joseph Myvette, spoke to the media about the incident, declaring that blood samples have been taken from both persons who were involved in the collision.

He said, “After passing the BSI junction, he [Tillett] collided with a white Tacoma pickup driven by Rolando Silva, which was coming in the opposite direction. As a consequence, Mr. Tillett sustained severe head and body injuries and is believed to have died on the spot. The helmet for the cycle was found a few yards behind the vehicle, while the cycle was some 71 feet from the pickup. The driver of the pickup, Rolando Silva, is detained, and blood samples were taken from both Mr. Silva and the deceased.”

Myvette said that the evidence that police have gathered so far has been submitted to the Director of Public Prosecutions, pending her directive.