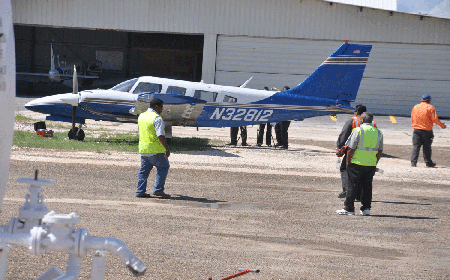 BELIZE CITY, Tues. Oct. 27, 2015–A United States-registered Piper PA34 Seneca twin-engine plane that had filed a flight plan to land in Belize two days ago arrived this morning, but instead of landing at the Philip Goldson International Airport (PGIA), it mysteriously landed at the Belize City Municipal Airstrip around 5:30 a.m., half an hour before the airstrip opened, and the plane was abandoned by the time authorities arrived to investigate.

When Kremandala reporters went to the airstrip around midday, the blue and white aircraft with the number N32218 emblazoned on its fuselage was under police guard and police crime scene technicians were busy processing the exterior of the plane, before a police K9 unit arrived.

The commander of the Gang Suppression Unit (GSU), Superintendent Mark Flowers, told us that the aircraft was being treated as a crime scene because the plane had landed without the required clearance from Belizean officials. Flowers also confirmed that when they arrived at the airstrip, no one connected to the plane was in sight.

Flowers told us, “We have made checks and verified that there was no flight plan for this aircraft to land here.”

Flowers said that the plane had flight clearance for Sunday, “when certain people was to come”. He further stated, “We are trying to determine right now who the occupants are. We know that the flight originated outside of Belize and the fact that it landed here is cause for concern.”

Flowers went on to say, “We are taking the necessary steps right now to process the scene; because these evidences are very transient sometimes… It may be there for a little while and when we realize that we need it, it’s gone.”

Flowers said the N3218 is an American aircraft and that when its operators had filed its flight plan and gotten permission to land in Belize on Sunday, it was in Managua, Nicaragua.

It has been reported elsewhere in the media that the plane was not outfitted with extra fuel tanks that would have enabled a long-distance flight.

Flowers also explained that in a situation such as this, his GSU are only securing the crime scene and that it is the police’s Anti-Drug Unit who will conduct the investigation into the apparent illegal landing of the plane, and will attempt to establish what its cargo was.

Flowers also mentioned that apparently there was some medical emergency with someone on the plane, based on what police had initially observed on board (bedding etc.)

Flowers confirmed that the plane would eventually be taken to the PGIA.

In early August, a grey BELL-407 helicopter was found abandoned in the Blue Creek area of the Orange Walk District. Government later confiscated the one-million-dollar helicopter and turned it over to the Air Wing of the Belize Defense Force, where it will be used along with a refurbished helicopter that was sourced from Taiwan.