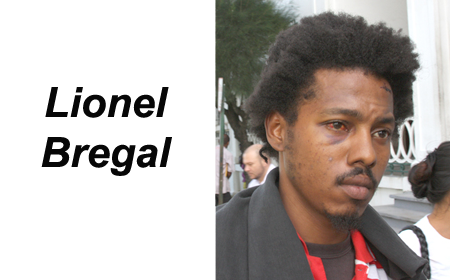 BELIZE CITY–Complaints of police brutality have become almost routine on the daily news, but one attorney who said that he has had just about enough of it spoke out today at the Magistrate’s Court in Belize City after his client and another Belize City resident were allegedly brutalized by police in connection with a burglary in Ladyville that reportedly netted hundreds of thousands of dollars’ worth of jewelry.

Although little information has been disclosed regarding the crime and no official police report has been released on the matter, attorney Oscar Selgado, who is representing one of the accused men, told the media that he is disgusted with the actions of the Police Department because his client, Lionel Bregal, was brutalized, allegedly by officers of the Ladyville Precinct, after he was arrested yesterday afternoon.

He said, “They [the police] are only saying that $390,000 worth of jewelry was stolen from somewhere that was burglarized, and that my client is implicated even though they cannot substantiate it with any sort of evidence. As a matter of fact, what my client said to me when I spoke to him at the hospital last night is that he was taken to the Crooked Tree Police Station along with an accomplice, but the accomplice was left there and he [Selgado’s client] was taken to the [Old] Northern Highway, between Crooked Tree and Biscayne, where he was severely beaten by [a police corporal] who told him that ‘your attorney Selgado is waiting at the Ladyville Police Station with the Ombudsman, but they cannot touch us; they will only wait there for a little while and then they will leave.’

“Unfortunately for them, we waited there until 10:30 p.m. when they returned with my client.”

Selgado declared that his client is still in the custody of Ladyville police and that his injuries, which include a swollen scalp and face, coupled with bruises and cuts in his head, have been classified as harm.

As a result, Selgado claimed that he plans to file a criminal suit against the corporal who allegedly beat up his client, Bregal, especially since he does not intend to “waste any time” reporting the matter to the Professional Standards Branch, which is an internal police unit that is mandated to investigate complaints against police officers.

It must be noted that in September of 2009 and December 2010, the victim, Lionel Bregal, was charged for two separate home invasions that happened in the Ladyville area, although we have not been able to ascertain if he has been convicted of any of those crimes.

The media also spoke with the sister of the other individual who has been detained, and she explained her brother’s ordeal under the cover of anonymity.

She said, “Basically, they took my brother from [yesterday] afternoon. They took him to the Queen Street Police Station and had him there until 2:30 [p.m.] when he was transported to Ladyville. The lawyer and I followed and they diverted him to Crooked Tree, where they beat him and came back to Ladyville around 5:30 [p.m.].

“After that, they went back to the station, but they left him in the vehicle and then they took him to Carmelita [Village] where they beat him again. My brother has serious injuries to his face and skin, along with pain in his groin.”

She mentioned that when they went to visit her brother today, his face was still swollen, and added that he is presently in fear for his life because the corporal has a “personal beef” with him which allegedly translates into a beating whenever the young man is in the hands of the Ladyville police.

“My brother can’t go to Ladyville for the same reason; that’s why he moved [to Belize City]. I don’t think that is right. Where he is right now, he doesn’t know what to do because he is in a bad state of mind”, the sister lamented.

Amandala contacted the Rural Executive Officer, Inspector Frederick Gordon, late this evening and he acknowledged that the burglary had indeed taken place, but verified that contrary to previous reports, no official estimate has been presented in respect to the value of the items stolen.

Gordon told us that the residence that was burglarized is located in the Bainton Bank area of Ladyville, and that the homeowners were out of the country at the time that the incident occurred.

We understand that upon returning to Belize yesterday, Wednesday, they realized that an assortment of valuables had been stolen from their home and that is when they filed a report to Ladyville police.

According to Gordon, an official police report has not yet been issued because the victims have not yet calculated the total value of their loss.

He also noted that he has initiated an internal investigation into the allegations of police brutality that have been levied by the victims.