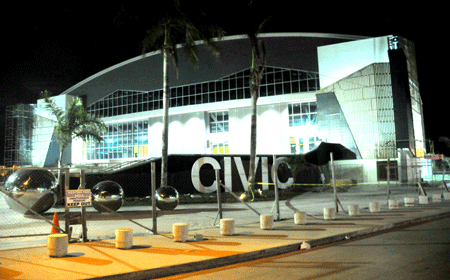 BELIZE CITY, Thurs. Nov. 16, 2017–Professional plumber Colin Gill dropped a wrench on the plumbing system of the multimillion-dollar Belize Civic Center when he called into the Wake Up Belize (WUB) Morning Vibes talk show today to provide his technical opinion.

The plumbing system in that building cannot pass a plumbing inspection under the Belize plumbing code, Gill declared.

When Gill was asked by Nuri Muhammad, one of the hosts of the WUB, how he arrived at that conclusion, Gill revealed that he was able to do so because he had been a part of a six-week plumbing training session at the Institute of Technical Vocational Education and Training, ITVET.

He said, “I was one of the instructors; I led the second week in that training.”

According to Gill, the shortcomings of the plumbing system could have been easily spotted by his trainees.  “The trainees, in their first week, went to the Civic Center to get a walk-through. They took a lot of pictures of the systems in the building,” he added. “When we did the second week of the training and we reviewed the pictures, the trainees, who were not experts in code, tore that building apart and saw what would be the flagrant violations in that building system,” Gill told the hosts.

However, Gill declined further comment on the matter when our newspaper contacted him. We understand from reliable sources that he has been threatened with court action by entities deeply connected to the administration behind the construction of the Civic Center.

As we had reported in our last edition of the Amandala, the Government of Belize plans to pay a private contractor almost a million dollars annually for the maintenance of the building.

Gill also registered his disapproval of this move in his call to the WUB. Gill conceded that the National Sports Council, which falls under the Ministry of Sports, is in no position to provide the necessary maintenance for the facility.

However, according to him, the Ministry of Works can do so, thereby eliminating the need for private management.

“To tell me that today our government can’t manage that building that is now the new Civic Center, that’s hogwash. Why do we have the Ministry of Works? The Ministry of Works has all the different kinds of engineers, and they can set up a maintenance schedule. I would agree the Sports Council can’t do that. The Sports Council does not have the requisite professionals,” said Gill.

In an interview on this matter last week, PUP Deputy Leader, Cordel Hyde, told our newspaper, “The whole scheme just stinks to the high heavens.”