Griga showed me a lot of love on Sunday afternoon (big up, Bastic), and it was all about the incredibly gifted Pen Cayetano, and a decision he made. It was a bold and daring decision, but Pen is an artist, and this is how artists are – bold and daring.

I met a couple brothers I’d been kinda estranged from, and it felt really good to link with them. There were dignitaries – one from Guyana, another from Jamaica, yet another from Punta Gorda, who attended. There were a couple officials from a certain organization which I understood to be conflicted; that organization had not been a part of the planning or the program. I surely appreciated their presence. Bless up, NGC San Ignacio Branch. Big up, David Ruiz from Benque. Blessings on the Afri-Garifuna Jazz Ensemble.

It will take a while for me to digest all the vibes and give you a sense in writing of Pen Cayetano’s tribute. I must immediately mention how valuable for the process were the commitments made by Dr. Ted Aranda and Cynthia Ellis-Topsey. They added a lot of credibility to the program before it even started.
Two or three weeks ago, I had asked Adele Ramos if I should prepare a speech, or just speak extemporaneously. She said, extemporaneously, because that would be from the heart. I basically followed her advice, but as Sunday, February 5, drew closer, I began to make notes to which I intended to refer, to keep me on track.

As things turned out, only a small portion of the notes would come into play on Sunday afternoon/evening. I did not even get to give a chronological history of the United Black Association for Development (UBAD), which lasted from early 1969 until early 1973, and which, to my mind, featured five distinct phases. (UBAD was not formally dissolved until November of 1974, but it is now clear that the leadership division in early 1973 occasioned by a dispute over the Unity Congress, was the real end of UBAD.) 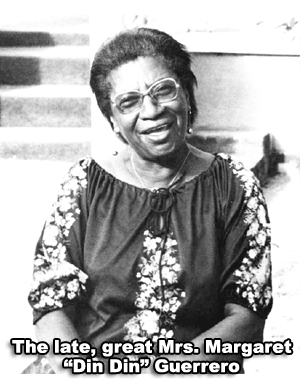 Young people are so phenomenal. Before I proceed, let me tell you how young people were coming up to me after the event and asking to have their photos taken with me. I’d never seen any of them before, and it is possible we may never meet again, but they filled my heart with such warmth and love. Griga, you truly special.

I felt thrilled to be able to give these young Grigans some history of the town 47, 48 years ago. To begin with, it was such a rough ride to and from Griga in those days. And UBAD was a broke organization: our vehicles were all ancient and struggling. The “Freedom Train,” for example, burned more lubricating oil than gasoline. This Sunday morning, as I was being driven south, it was raining a lot on the Hummingbird, but modern vehicles are such a dream and the road is so modernized that “Di Gap” is nothing compared to what it used to be. Travelling to and from Griga in old trucks and old buses (manual gears) loaded with passengers and cargo used to be frightening in the hills. Di Gap, roughly between Miles 26 and 29 on the Hummingbird from Griga to Belmopan, often had your heart in your mouth with fear.

The UBAD officer who led our trips to Griga between March/April of 1969 and late 1970 was Charles X “Justice” Eagan. Later named Ibrahim Abdullah, he was already a pioneer (and chairman) of More Tomorrow village when he became a UBAD officer in February of 1969. Justice was a Standard IV dropout who had been deported to Belize from Atlanta State Penitentiary in the United States sometime early in 1961, as far as I could figure out. (Atlanta State Penitentiary, incidentally, is the same prison where Marcus Garvey served his two years in jail in the late 1920s.)

Justice had been converted to the Hon. Elijah Muhammad’s Nation of Islam while in jail, but his knowledge of the religion was relatively rudimentary. Justice was not a reading man: Justice was a verbal man, and he was an action man. He was a pure force of nature.

During the two years I spent a lot of time together with Justice, I never figured out how his love affair with Griga had begun. All I know is, as soon as I was named UBAD President in late March of 1969 to replace Lionel Clarke, Justice said to me, “Yu always di talk ‘bout Africa dis and Africa dat: les go da Stann Creek.” (The name “Dangriga” came several years afterwards.)

On the right hand side of the road just as you were about to enter Griga in those days, there was an iconic club named Eden Rose in a large, open yard. This was our first stop – mandatory. The proprietor was Paul “Pags” Guerrero, and his wife, Margaret “Din Din” Guerrero, was like a classy, dignified hostess. They would have been in their late forties, early fifties, maybe. Pags was a beautiful personality, so cool and gentle. Din Din was calm, but you could see her strength. Theirs was a wonderful relationship. They ran a club which sold alcohol, and yet no one dared to disrespect. This was vintage Griga. (By the way, having converted to Islam, Justice did not drink alcohol or smoke weed.)

From Pags and Din Din, we turned left into St. Vincent Street, which is still the main street in Griga. Mrs. Velasquez, Therese Velasquez’s mother, lived in another open yard with a lot of space, even though there were at least two houses in that yard. Nowadays, all the open yards of Griga are packed with dwellings and buildings. At least, this is how it seems to me.

Entering the Velasquez yard, Justice would immediately ask for hudut. Nobody in Belize City, I swear, knew what was hudut in 1969. The fresh fish would be sent for, and the beating of the green plantains began. The fish and the plantain would be flavored with the awesome coconut milk. In 2017, seems to me like hudut owns Belize, but I suggest to you that it was Charles X Eagan who probably began this craze.

After a while, Machete, Griga’s most famous drummer, would come by, and the drumming would begin. Justice was so happy. The drums brought out Africa in him, and he embraced his ancestry. This was nothing coming out of a book: Machete was talking to Justice through the drums, and Justice, an African warrior-king, was responding.

In the night, after baths, we held the public meeting further down St. Vincent Street going north. This was a spot where the political parties held meetings, but I don’t remember a lot of details. This was probably a bit north of where the police station and the present BTL office are located. I think there may been a restaurant (Chinese?) on the eastern side of the street.

It was one of those UBAD meetings which made an impression on the young Pen Cayetano. I would like Pen to know that, for my part, Griga was making an impression on me. Justice was right: Griga was Africa. I knew this was the closest I would ever get to the home continent of my African ancestors, and in Griga the spirits of the ancestors were alive. This is the secret of Garifuna duo. Let me qualify the previous statement, and say, this is what I believe.

For most of my adult life, I found ways to feed off the venom and hostility of the power structure in my home country, and I converted that venom and hostility into positive energy. This was a defence mechanism on my part. Africa was hated, ridiculed, and feared, all at the same time, in 1969 Belize, and I was the one who had gone against the church and the Ivy League to preach glory to our African ancestors. My academic credentials could not be denied, and so the power structure, through their minions, made my personality the issue. On Sunday, Pen Cayetano said, Griga loves you the way you are, old X, and the people cried Amen. In his grave, Justice was smiling, I am sure.

“Among the current generation, as with the Barrows, those with a university degree avoid the civil service, though some may do a short stint...
Read more
Publisher

In the summer of 1968, at the age of 21, I rushed home to British Honduras with a first degree in English from Dartmouth...
Read more
Publisher

While it is almost never applicable or relevant to compare situations in our little Belize with those in the superpower United States of America,...
Read more
- Advertisment -