About three weeks ago, Maurice Jones brought the 77-year-old photograph to me which is reproduced on this page. He said that one Nick Sanchez had given it to him. I didn’t get a chance to find out any details about Nick Sanchez, because I was so busy trying to identify the legendary football players/athletes in the photo.

The writing on the photo says it is from 1940, but there is some confusion as to how many of the players are from the famous Crimson football team, because this is also supposed to be an All Belize selection. It is distinctly pointed out that Louis Guild, who is second from right in the back row, is actually from the Police team. But there is no other such distinction made. (When I discussed this with my dad, he was positive(?) Louis Guild never played for the Police, and he mentioned that Jim Stephen was MYA.)

In the row of five players who are kneeling, second from left is Emilio Sanchez, who later became Jamaica’s national boxing coach for many years.

In the center of that kneeling row is Jack Lind, who was as formidable in cricket as he was in football, while on the far left of that kneeling row there is a suggestion that this may be George “Rough Tough” Young. If so, Young must have been very young in 1940, because I believe I saw him play for Landivar in the middle 1950s at Edwards Park (now Rogers Stadium). On Jack Lind’s immediate left is a man we know as Parpy Banner, but on Parpy Banner’s left we don’t have identification on that individual.

In the back row, we begin on the left with the iconic Bulldog Davis, who appears to be a coach. I only saw Mr. Davis in his senior years, and he was still possessed of an incredible physique, while his eyes were extraordinarily light in color.

On Mr. Davis’ left is Eric Gill, and the only Eric Gill I know was called “Wappa,” and, to the best of my knowledge, he is still alive in Chicago. Wappa was also a famous track star in British Honduras.

Left of Wappa is Kenneth Ewing, and I believe he may have been a track sprinter, while I am positive the man next to Ewing, on his left, was indeed a great track sprinter – Roy Canton. Roy Canton was also a great basketball player, and was very good in tennis.

Next to Roy Canton on his left is a man I have heard my dad speak of many times with great respect – Jim Stephen, and left of Mr. Stephen is the aforementioned Louis Guild, who fathered the late Berger 404 superstriker, Gene Guild, as well as Emerson and Steve.

At the extreme right on the back row is Mr. Horace Michael, who would have been one of the coaching elders. He was known as a man of respect. He is referred to as a shoemaker in the photo caption.

It is not possible to identify the goalkeeper, who is wearing a cap and lying in front of the kneeling row of players.

There is important history represented by the photograph, but there are very few still around to hold discussions about that history, and amongst those in Belizean power and authority, both in the sports bureaucracies and in the political directorates, there is a strange and total lack of interest in such matters.

It is an amazing thing, but the only sport which religiously kept records in British Honduras was and is Crosscountry cycling, which began in 1928. We cannot even say for sure when football and cricket actually and formally began in the colony, although I have seen the picture of an All Belize football team from the early 1930s, so I would guess that football and cricket began here before cycling. 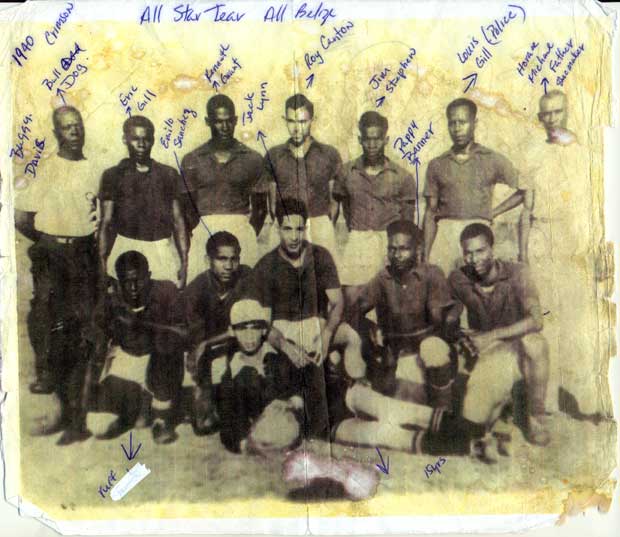 I am positive that basketball began after football and cycling, and it would have been the Jesuit priests and scholastics who introduced basketball in Belize, as they introduced Golden Gloves boxing. But we have no records of how these sports began, and I am wondering if the 1931 hurricane, which destroyed the old St. John’s College at Loyola Park in the Yarborough area, is responsible for our lack of a historical record for basketball in particular.

When I was growing up in the 1950s and 1960s, sports were very big in the colony (which was dominated by the old capital), especially football, cricket, boxing, and later basketball, but the daily newspapers of the era – Clarion, Billboard, and Times, paid scant attention to sporting activities. (Let it be noted that racing of sailboats was also a big deal.)

When The Reporter came on the scene in 1967, they too basically ignored sports, while Amandala, established in 1969, always had a sports focus, but it took us many years to acquire modern printing technology which could reproduce photographs. As first editor and now publisher of this newspaper, I come from a family which was very dedicated to sports and held our athletes in high regard.

Belizean society, at the level of our power structure, however, has disrespected athletes during my lifetime. One of the reasons for this is that most of Belize’s superb athletes come from our working classes, but the Belizeans who control the finances and the sports bureaucracies come from the upper classes.

This is a long and painful story, and one which I have tried to tell on many occasions before. In this matter, as in others, I am a voice crying in the wilderness, as it is said. So it has behooved me to cease with my lamentations.

I will end with a story my dad told me. There was an excursion to Honduras when he was a star footballer in the mid-1940s which featured football and basketball selections traveling together to the republic. My dad was very good friends with Belize’s greatest basketballer, Henry “Eagles” Usher, so he got a sense of the difference in the treatment given to the footballers and basketballers, with the basketballers being considered of a higher social category. The basketballers were “treated like kings.”

It should not matter what social category the sports stars who represent Belize regionally and internationally come from, but it frigging does. Ask Kaina. Belize is a society which is in absolute denial where its class prejudices are concerned. We still teach our children that our slave ancestors fought for their slaveowners in 1798. While it is possible that one or two enlightened slaveowners were supported by special, senior slaves when the Spanish Armada threatened, overall the official 1798 narrative is bogus. Slaves are slaves, and masters are masters. Can you tell me in which one of these two categories the Belize Olympic and Commonwealth Games Association falls?