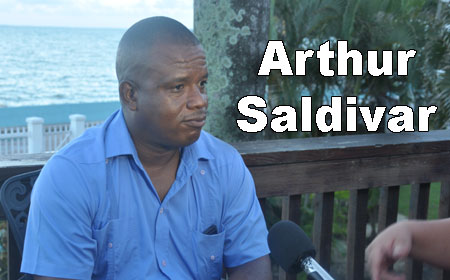 Party Leader Francis Fonseca made the announcement to the media, party supporters and other interested persons after the party had made the decision.

On August 27, the PUP suspended Saldivar from the National Executive and also from his position as the candidate for the Belize Rural North constituency, and announced that an investigative committee had been set up to look into “very serious allegations made against him.”

The report of that investigative committee was delivered to Party Leader Fonseca on September 12, and the PUP national executive met today to consider Saldivar’s fate.

Minutes later, when reporters were finally allowed inside Independence Hall, Party Leader Fonseca announced: “After 2 hours of deliberation, 2 hours of discussion, the national executive of the Party reached a decision on this matter. And that decision, ladies and gentlemen, is that with immediate effect, Mr. Arthur Saldivar is removed as the standard-bearer for Belize Rural North for the People’s United Party and is removed as a member of the national executive of the Party.”

Two weeks ago, the party set up an investigative committee to investigate certain allegations made against Saldivar that emerged in the media and had to do with his conduct as an attorney.

On Wednesday, August 6, 2014, the story broke that Melonie Coye, a former client of Saldivar, whom he had defended for years in the country’s biggest money laundering case, made the allegation that Saldivar had taken almost one million dollars of her money, and had not returned it.

Coye hired the law firm of Courtenay and Coye to recover the money from Saldivar.

Eamon Courtenay, S.C., who is a former PUP minister, told Amandala on Thursday, August 7, the following day after the story broke that by the following day, Friday, “I will be filing court papers in a civil action against Arthur Saldivar to recover my client’s money.”

Exactly one month after the story broke, on September 6, 2014, the PUP chairman, Henry Charles Usher, wrote Saldivar a letter captioned, “Re: Suspension and Investigation.”

Usher’s letter opened with the statement: “This is further to our correspondence of 27 August, 2014 regarding the decision of the National Executive of the People’s United Party (NE) suspending you as a Party Official and from all Party activities and appointing a Committee to conduct an internal investigation into the public allegations made against you.”

“We had promised to provide to you all materials gathered by the Committee in its investigation and we now do so.”

The letter went on to list the specific allegations of misconduct on the part of Saldivar that they would be investigating. These were outlined as followed:

“(1) That you have in your possession over $900,000.00 plus of your client’s money (Melonie Coye), unauthorized. That your client, through her new attorney, Mr. Eamon Courtenay S.C., is demanding the return of the money or in default a civil claim to recover said sums. The information in possession of the Committee in this regard emerges from a copy of a letter from the law firm of Courtenay Coye LLP to you requesting the return of the said monies. This letter was accessed from news reports of Channel 5 and Channel 7.

“(2) That you illegally entered home of Don Blunt and occupied the said premises. The information in this regard emerges from news reporting of this matter by Channel 5 and Channel 7.

“(3) That you physically assaulted one Boris Mansfield.”

It was then stated in the letter that copies of the news reports of the alleged misconduct were attached. Usher then noted in the letter that “the scope of the Committee’s remit is to not find a conclusion of the guilt or innocence in relation to any of these allegations, but to make a determination as to whether the alleged conducts are detrimental or prejudicial to the interest of the Party, your candidacy and as a member of the NE, or is in violation of the Code of Conduct of the Party.”

After mentioning that the committee had met with the executive of the Belize Rural North (BRN) constituency and inviting Saldivar (with or without a representative) to a meeting with the Committee on Thursday, September 11, 2014, at 2:00 p.m. at Independence Hall, Usher specified to Saldivar in the letter that the committee would be making a “determination of the following issues”:

“1. Whether the alleged conducts (singularly or cumulatively) and your responses to them so far have or will tarnish your candidacy.

“ 2. Whether the alleged conducts (singularly or cumulatively) and your response to them so far give the appearance that you have allowed your integrity to be called into question. If yes, what steps (if any) can be taken to mitigate the public appearance/impression.

“3. Whether the alleged conducts (singularly or cumulatively) and your responses to them so far give the appearance that you have allowed your position as Standard Bearer for the BRN constituency and a member of the NE to be demeaned. If yes, what steps (if any) can be taken to mitigate the public appearance/impression.

“4. Whether the alleged conducts (singularly or cumulatively) and your responses to them so far give the appearance that you have compromised the fair exercise of your function as a Standard Bearer and member of the NE. If yes, what steps (if any) can be taken to mitigate the public appearance/impression.

“5. Whether any potential legal claims will impact your ability as Standard Bearer and member of the NE.

“6. Whether your responses to the alleged conducts so far gives the appearance that you cannot operate well under stress. If yes, what steps (if any) can be taken to mitigate the public appearance/impression.”

The letter further acknowledged that the committee was aware that at that point the allegations were just that – allegations, and that no actual civil or criminal action had been lodged. “The Committee is also cognizant that you are on the ground in the BRN constituency working; you have a good team and machinery in place and the BRN constituency in terms of logistics is prepared for the next general elections, whenever it is called,” it conceded.

The Chairman’s letter concludes: “But the NE under Article 13(3) Constitution, referred to in our prior correspondence, is charged with the organization and administration of the Party and shall have the power in an emergency to formulate a position. And this arises where matters that have the potential to be detrimental or prejudicial to the interest of the Party come to the attention of the National Executive. This the NE did on 27th August, 2014 and thus the appointment and convening of this Committee.

“We await your response as outlined in our prior correspondence.”

Fonseca today told reporters that: “We believe he needs to deal with these allegations which are very serious and other matters which have come to light. And we believe he needs to have the opportunity to deal with them, and it is certainly, we believe, not in the best interest of the People’s United Party to have Mr. Saldivar as a candidate for our party at this time.”

The blame for Saldivar’s political fall has been put by Blease squarely at the feet of the party’s new national campaign manager, Godfrey Smith.

Saldivar, however, when asked about Smith’s role in his political misfortunes, would only say, “Again, I will be like Bob Marley. I deal with the sheriff, not the deputies.”

While Saldivar appeared to shy away from blaming Smith directly, that was not the case with his public relations man, Blease, who was unsparing of Smith.

Blease told reporters: “You know what we believe? We believe that only one or two persons could have been responsible for that decision made today. It has to be a decision by no other than Godfrey Smith, and probably a few others that might have been in support of him. But there is nothing there. We are upset, annoyed and we are saddened to be PUP supporters for a decision that is made like this. We were made privy of this by some insiders already…that they brought in Godfrey Smith. Godfrey Smith was on the outside, but Godfrey Smith is a powerhouse in the PUP, that if he says that Arthur Saldivar should go…then either Arthur Saldivar goes or he walks. That is the position.”

Today, Thursday, Saldivar told Amandala that he thinks that Smith and Senator Lisa Shoman plotted against him for his anti-LGBT stance.

In the UNIBAM challenge to Section 53 of the Criminal Code, Godfrey Smith, along with Shoman and the British attorney Lord Peter Goldsmith, defended Caleb Orozco, UNIBAM president.

As he emerged from Independence Hall, Saldivar had very little to say, but around 5:15 p.m., he apparently had a change of heart and he called an impromptu press briefing at the Radisson Fort George Hotel, at which he said that the PUP’s decision “doesn’t faze me.”

“My first reaction to it was simply to rise and leave. If that is the decision, then the party has abandoned me,” Saldivar declared.

“From my understanding of things, the report of the committee was not contemplated; it was not even considered. Because in retrospect, in actuality, the report did not yield anything; there is nothing there,” he said.

Saldivar added: “The allegations were baseless and certainly, once it was examined by those who were charged with responsibility, they recognized it was not a situation that would have warranted the outcome that came about today. So I’m as shocked as anybody else, but again, my constitution being what it is, it doesn’t really faze me.”

Although the proverbial political deck of cards appeared to be stacked against him, Saldivar optimistically said: “I’m prepared to run independent of the PUP. I will be a candidate in the upcoming general elections. I will go firstly to the people of the Belize Rural North to seek a ratification of that decision, and I do believe that at the end of the day, with their support, I will win.”

The woman whose name has been at the center of the controversy involving Saldivar, his former client Melonie Coye, has not made any public statement on the matter of the money Saldivar allegedly took from her.

Saldivar also confirmed to Amandala that Coye did not speak to the PUP investigating committee, although they made attempts to speak to her.