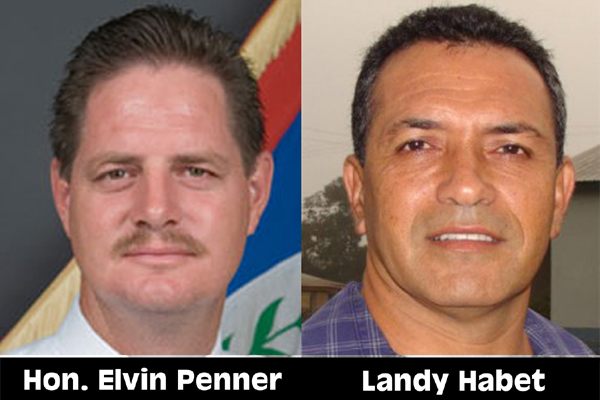 “If she claims that so many signatures are not genuine signatures of electors, then she can implement section 9 (a) of the Recall Act—if indeed some persons are forging signatures—so why does she not investigate and take these persons to Court, as the Act provides for?
– Landy Espat, PUP member of the Elections and Boundaries Commission

Landy Habet, the Opposition member who still has ambitions of becoming the area representative for Cayo North East, told Amandala today that the Opposition People’s United Party should be given an opportunity to resubmit the election petition to remove Elvin Penner—the current United Democratic Party representative who Prime Minister Dean Barrow has asked to resign from his party over an immigration scandal which broke last September 2013.

Earlier this week, the Office of the Governor-General informed the PUP that its recall petition, submitted on November 28, 2013, had failed because it had “not been duly signed by the requisite number of electors” – that is, 1,744 of the 5,815 registered voters. The PUP had submitted 2,002 names on the petition and the Government rejected 337 of them, meaning that those which were validated amounted to 1,665. The PUP was, then, short of 79 valid signatures, according to the ruling.

Habet said that the PUP had gone through a painstaking process of verifying the signatures before submitting the petition, and the party needs to approach the Elections and Boundaries Department—the Government agency which did the vetting—to find out exactly what happened.

Julius Espat, Deputy PUP Leader and area representative for Cayo South, told Amandala that party officials will be meeting the week of January 7, to decide the way forward.

Espat said that PUP officials will meet on Monday and Wednesday, and at those meetings their legal advisors will give their point of view on the latest development.

Habet told us that the Cayo North East Committee is “really disappointed,” because they were hoping that 2014 would see the recall referendum come to fruition, but on January 2, they got the bad news: the Government had announced that the recall petition did not meet the legal requirements.

For his part, Habet believes the process was undermined by the ruling party, citing UDP officials making public comments that the recall attempt would never work.

He additionally pointed to early attempts by the UDP to undermine the recall process by putting up banners in the constituency urging people not to sign the petition.

According to Habet, the signatures they submitted amount to 34.4% of registered voters. The law requires 30%.

A similar controversy arose in the context of the call for a referendum on offshore drilling back in 2011, when the Elections and Boundaries Department ruled that of the 20,160 petition signatures submitted by Oceana Belize and the Belize Coalition to Save Our Natural Heritage (BCSNH), 8,047 had to be rejected. This meant that the 10% threshold for the national referendum was not met.

In its notice to the PUP on the Penner petition, the Government indicated that 337 signatures had to be rejected: 52 because they did not match the records at the Elections and Boundaries Department; another 52 because they were not registered in Cayo North East, and yet another 52 because they were not registered at all. Furthermore, the Department said that 11 entries had no signature, 79 of the petitioners had signed twice (resulting in 158 duplicate entries) and 4 had signed three times (resulting in 12 triplicate entries).

The notice also said that Maria Rebecca Cunil’s name appeared on the list of names submitted in folder 2, but neither her name nor signature were included in the petition.

The Department said that their investigations were limited to those persons who had signed using a thumbprint or an “x”.

Chief Elections Officer Josephine Tamai warned that it is an offence to forge a signature onto a petition or to willfully sign such a petition more than once.

Landy Espat, one of the Opposition reps on the Elections and Boundaries Commission, questioned: “If she claims that so many signatures are not genuine signatures of electors, then she can implement section 9 (a) of the Recall Act—if indeed some persons are forging signatures—so why does she not investigate and take these persons to Court, as the Act provides for?”

We called Tamai for further information and clarification, but she has declined comment, saying that the matter may end up in court. She told us that she had presented the Governor-General, who wrote the PUP with the news that the petition had failed, with a detailed report with all names accepted, plus all names rejected and why.

Tamai would also not comment on whether the petition could be resubmitted if the PUP is able to cure the deficit of 79 names.

Julius Espat said that when the petitioners signed, the party took note of their IDs and asked them to put their thumbprints as a requirement.

The Deputy PUP leader said that a lot of those voters were from out of Melchor, as there are “a lot of people on the other side [of the border] that vote.” He said that if they are allowed to vote in elections, they should also be accepted in the recall petition.

The participation in elections of Guatemalans who are used to swing the vote is totally wrong, Espat indicated, asserting that it is wrong whether it is the UDP or the PUP which is responsible for it.

“That is why the whole system we have is not working for us,” Espat said.

He told us that the faults and defects in the systems and procedures need to be visible to everyone, and we need to get “to the core of the problem” so that better results can be realized.

Espat said that they would like to know if they can go out and get 79 more, so that they could meet the petition threshold. He said that he does not see anything in the law that says they can’t cure a defective petition.

Habet—who lost to Penner in 2012 by a mere 17 votes—told us that even if the recall does not go through, the Cayo North East constituency is still awaiting an election, whether a by-election or a general election. Habet said that all indications are that there may be very early general elections.