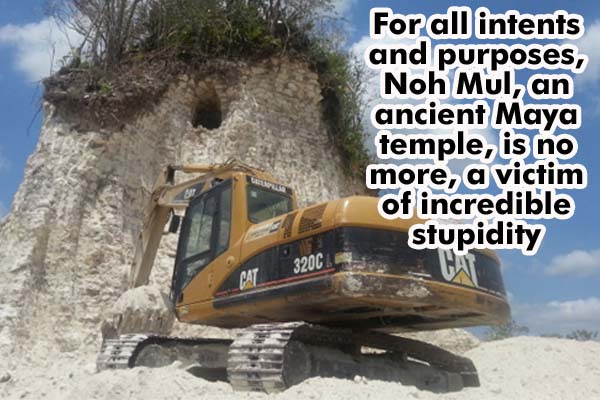 Noh Mul (Big Hill), an ancient Maya ceremonial center described as the tallest structure in the Orange Walk/Corozal area, was illegally mauled late last week in construction works reportedly being undertaken by a company owned by a politician of the United Democratic Party. However, as we go to press tonight, there are no indications that anyone has been charged for the destruction of the nationally protected site, to obtain road fill.

Neither the Government of Belize nor the National Institute for Culture and History (NICH) has issued a statement on the matter, which is now the focus of international attention, having been reported by Business Week, USA Today, Fox News, and other major news outlets overseas.

Dr. Jaime Awe, Director of the Belize Institute of Archaeology, a subsection of NICH, however, expressed to the media his outrage over the sacrilege done to our patrimony.

Located a mile from the Northern Highway, Noh Mul is part of the twin villages of San Pablo and San Jose, and it is connected to late pre-classic and late classic Maya civilizations spanning 350 BCE to 900 CE.

The Opposition People’s United Party issued a press release Monday saying that, “The damage done to the Mayan temple will certainly diminish the growth of a tourism industry starting to develop in the northern districts, and will decrease the potential for much needed employment in the region.”

It added that the PUP’s Northern Caucus strongly condemns the destruction and plundering of the ancient Maya Temple, Noh Mul, and calls on the government to ensure that the perpetrators are brought to justice and that the full extent of the law is applied.

“This structure was constructed by the Mayas thousands of years ago and was being demolished for its rich material to be used for road fill,” the PUP’s release added.

Citizens Organized for Liberty through Action (COLA) also issued a statement saying, “It is clear that with this latest action, combined with the nonchalant surrender to the rosewood cabal and the Government’s insistence on circumventing and ignoring the court’s ruling on offshore drilling, that the current administration shows no respect for the environment or for the historic perspective of Maya society and culture embodied by these monuments.”

COLA added that, “We can only describe it as obscene and a new low for any national administration.”

COLA said, “It is especially galling that the company involved is tied to a failed UDP candidate in Orange Walk Central, with the apparent blessing of the powerful Minister of Natural Resources based in Orange Walk North, where the monument is located.”

It calls on the Department of Archaeology to “…follow through on its promise to enforce the law and assign strict penalties to those responsible.”