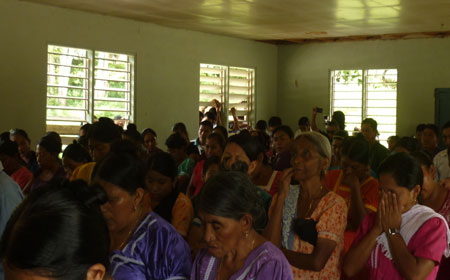 SANTA CRUZ, Toledo, Mon. July 27, 2015–The “Santa Cruz 13″—a group of persons charged and arraigned on the claim that they had illegally arrested and detained Belizean Rupert Myles in Santa Cruz, where Myles was accused of desecrating a Maya sacred site, Uxbenka—are scheduled to appear in the Punta Gorda Magistrate’s Court tomorrow, Tuesday, July 28.

A statement from the Toledo Alcaldes Association (TAA) recalls that, “The Maya leaders, including the spokesperson of the Maya Leaders Alliance, Cristina Coc, were arrested by the police special forces on June 24th, 2015. At 4:00 a.m., the police stormed homes in Santa Cruz, dragged unclothed men out of their homes, handcuffed them, and drove them to the Punta Gorda police station. During the arrest a grandmother and four of the villagers were injured.”

The statement added that the Maya were charged for the alleged unlawful imprisonment, common assault and aggravated assault of Myles, allegedly detained for misconduct in the village, during a fajina on June 20, 2015 in the Maya village of Santa Cruz. They were released on bail.

This Sunday, July 26, 2015, neighboring Maya villages and friends of Santa Cruz residents gathered at the Santa Cruz Community Center to pray for peace and justice.

“The spiritual leaders focused on the significance of coming together as one (se komonil) and the importance of walking together in love and righteousness. Thus, the gathering prayed for continued unity, strength, peace, love, and justice. They also prayed for all the leaders of this country, including alcaldes and government leaders. They prayed that the Supreme Being would open their hearts and minds, and that they would be given wisdom, knowledge and understanding so that at all times righteousness and justice would prevail,” the TAA said, in an update on the event.

The TAA also issued a call upon the Government of Belize to comply with the order of the Caribbean Court of Justice (CCJ). It also urged the Government to meet with Maya leaders to begin implementation of the CCJ order.

Dr. John Morris, Director of the Institute of Archaeology under the National Institute of Culture and History (NICH), frowned upon Myles’ actions when he spoke with the media on Friday. Morris confirmed that Myles had damaged a substantial portion of the Maya mound, and that he would face eviction.

Also, under law, there are sanctions that a person can be slapped with for causing damage to an archaeological site, and we understand that Myles could also be subject to those sanctions.