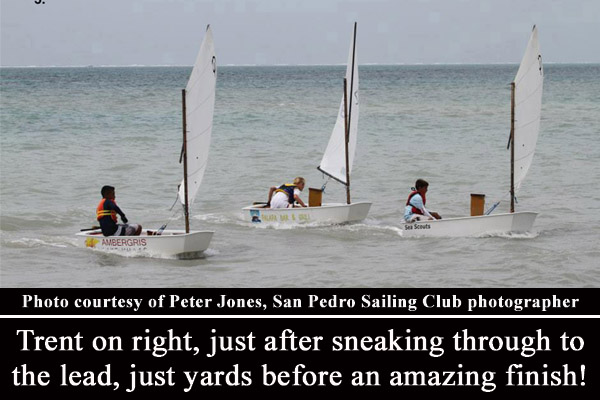 Twenty young sailors from Belize City, Placencia and San Pedro skippered Optimist dinghies for 2 days in ideal waters and conditions off Banyan Bay Resort during last weekend’s thrilling Lobsterfest Regatta on June 22-23. For some of the skippers, this was their very first regatta, ever…

The sailors were divided into two evenly matched fleets of 10. Each fleet raced four times. The day’s races placed 10 skippers – the top 5 from each fleet – in the finals; however, the other 10 were far from done. On Sunday, they raced against each other in a 2-race, runner-up series. The top three were Tyler Garbutt of Placencia, Davin Puc of San Pedro, and Carlos Villatoro of Placencia.

Then the top 10 from Saturday took to the boats for their 2-race final. The first of these two 2-lap races was the most dramatic race of the regatta. Faith Noel of San Pedro, who had sizzled to the top of Saturday’s leader board with one 1st and three 2nd place finishes, looked to be continuing her dominance; however, Jerdon Anderson of San Pedro and the Sea Scouts’ Trent Hardwick would not let her break free of their pursuit. Both Jerdon and Trent had taken a first away from Faith on Saturday, and in this race, the lead changed among these leaders several times. Faith rounded the final mark ahead of Jerdon and Trent. Riding white-capped swells on the run to the finish, Jerdon, not Trent, appeared to be the threat. Then, somehow, Trent, from behind and to the right of the 2 leaders maneuvered between them, but still behind. Suddenly, and barely 15 yards from the finish line, the crest of a wave caught Trent’s boat. He surfed that crest, cutting between his two surprised rivals to a stunning victory. The wave deposited him across the line, barely a second ahead of Faith and maybe a half second more ahead of Jerdon. Attached photos tell the story.

Trent’s 3rd place in the next race was sufficient to award him the regatta’s First Place plaque. Kevin Velasquez’ 4th and 1st place finishes secured 2nd place for him, and Jerdon Anderson placed 3rd, after a 5th place finish in the second race…

There were many winners in this regatta. The Belize Sea Scouts presented the Award for Sportsmanship during the 2013 San Pedro Lobsterfest Regatta to San Pedro’s Mitchell Sersland. They particularly noted Mitch’s willingness to help others, and eagerness to cheer them up, too. Out of the twenty sailors in the regatta, no fewer than eight different skippers sailed themselves to at least one 1st place victory. Three others sailed to at least one 2nd Place finish, and four more sailors, different ones from those above, took a 3rd place at least once. So, no less than 15 of the 20 sailors in San Pedro’s regatta enjoyed a place in the winners’ circle at least once. That speaks to the spirit of this particular regatta, and to its degree of success.

Congratulations to all the sailors who came, for the way they handled themselves on and off the water!

(Ed. Note: The above article has been edited slightly due to space.)